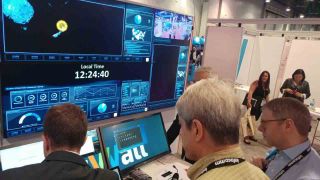 The What: VuWall is now offering its TRx solution as a fully functional AV management system, including encoders, decoders plus their control software.

The What Else: TRx 2.0 is VuWall’s next generation of distribution of AV signals and content over standard IP networks. The solution combines high-end quality streaming up to 4K resolution to drive unlimited numbers of inputs and outputs designed for presentation rooms, control rooms and complex distribution across multiple buildings.

Using VuWall’s Tx series of single stream (Tx100) or multi-stream (Tx400) encoders, the system is centralized on a VuWall TRx server before being switched to a choice of single end points or multi-stream outputs for video. End user experience is simplified by drag and drop GUI. The system is wholly scalable and operates with 3 party hardware including Matrox Maevex and AMX/SVSI networked solutions, as well as all the devices compatible with the SDVoE standard.

The TRx software platform makes it easy to configure, operate and maintain the pool of encoders and decoders on a large AV network. Being compatible with any Windows, Mac, OS, and Linux operating system, the TRx software is preloaded on an appliance server, which is included in the package. Video runs at H.264 compression – allowing for high quality and low bandwidth distribution for AV over IP.

The solution comes with a preconfigured standard 1GBit Network switch (24/48 Port). The switch is configured to handle large numbers of streams in unicast or muticast mode. By adding multiple switches, it is easy to upgrade; and with 10Gb uplink, a big network can be built with stacked units.

The Bottom Line: Although engineered to work seamlessly with VuWall’s Tx and Rx hardware, TRx is also designed to work with third party hardware. Just like all other VuWall products, VuWall’s TRx is open to multiple hardware platforms and already supports some of the major manufacturer brands as well as all hardware which is SDVoE compliant.