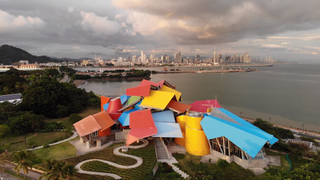 The Biomuseo is a jewel in Panama's crown. Housed in a spectacular building created by famed architect Frank Gehry and located on the Armador Causeway at the Pacific entrance to the Panama Canal, the Biomuseo hosts a permanent exhibition entitled "Panama: Bridge Of Life." In eight galleries, conceived by Bruce Mau (founder of the Institute Without Boundaries), the museum explores the literally world-changing impact of the creation of Panama three million years ago. The rising of this natural land bridge from the ocean simultaneously connected North and South America while dividing the Pacific Ocean from the Caribbean Sea, letting land mammals cross between the continents while dividing the ocean ecosystems forever.

The museum opened in 2014 with five of its eight galleries completed and has enjoyed tremendous success since then. For the creation of the three remaining galleries, which are considerably more complex than the first five, the Biomuseo turned to Tellart, a design firm with offices in San Francisco, Amsterdam, and Providence, Rhode Island.

Jack Lenk, Production Director at Tellart and adjunct faculty at the Rhode Island School of Design, explained, "The Biomuseo already had content for the first two new galleries, Oceans Divided and The Living Web, and were looking for exhibits to help tell their stories. There was also a need for interactive kiosks in the final gallery, the culminating showpiece Panama Is The Museum."

Oceans Divided features two enormous aquarium tanks that show visitors the differences in plants and animals between the Pacific and Caribbean ecosystems, and The Living Web takes visitors up into the rainforest canopy with interactive displays under a huge stylized sculpture of rainforest life. In each of these exhibits, visitors learn more via a number of high-definition video displays, the vast majority of them interactive. In Panama Is The Museum, visitors walk through an immersive experience that triggers different projections on a large central sculpture based on where they step; this experience must be augmented by kiosks around the room that allow for direct interaction and information recall. For all of these kiosks and information displays, Tellart relied on Visionary Solutions, Inc., to bring everything together.

"One of the Biomuseo's technical requirements was that they wanted to control everything from a server room in the basement, with all the computers and power control," Lenk said. "The distances from there to the galleries were such that we had to come up with transmission technologies to handle HDMI 4K screens, as well as USB Touch for the interactive display touchscreens. That's where VSI came into play. We didn't use fiber optic cable; we did everything over CAT-6A cable, running hundreds of feet from the server room-sometimes as much as 80 percent of the rated distance spec. The server room had to feed 23 displays, all but three of them touch-interactive, with rock-solid reliability and the lowest possible latency."

"This was our first project working with VSI," Lenk noted. "We reached out to an integrator near our San Francisco office, David Carroll & Associates, and they worked with our Lead Technical Designer to help configure the system architecture and to help us get the best equipment for the job-in this case, 23 Visionary Solutions E4100 encoders for the server room and another 23 Visionary Solutions D4100 decoders, one per display. The Visionary Solutions gear fit the bill exactly for what we needed."

"The guys at Visionary Solutions were really helpful," Lenk added. "They got on the phone with us while we were in Panama and gave us technical advice and suggestions for tackling issues as they came up when installing the system. The remote support they offered was great."

The new galleries opened in mid-March, and thousands of visitors have been enjoying the exhibits since then. "We're quite satisfied with the VSI gear," Lenk concluded. "The company has been really supportive, and the gear itself has been really cool. We'd not hesitate to use it again in a future build."