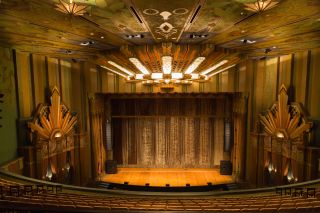 Two of the foremost performing arts venues in Spokane, WA have upgraded their audio capabilities with the installation of essentially identical new reinforcement systems, differing only in respect to scaling of array size to venue capacity. Both systems are based around Meyer Sound Leopard line array loudspeakers, as supplied by Eugene, OR-based George Relles Sound.

Built in 1931, the art deco Fox Theatre was exquisitely restored to its original opulence and reopened in 2007 as the Martin Woldson Theater at the Fox. The 1700-seat venue is owned and operated by the Spokane Symphony, and hosts a wide variety of concerts and events in addition to the orchestra’s own subscription series.

According to general manager Brian Ritter, the theater had continually struggled with its vintage 2007 sound reinforcement system. “We had to compromise because of budget restrictions at the time,” he admitted, “and ended up with a system we never could get to respond evenly across the hall. It also would overemphasize midrange frequencies that got harsh as the volume went up, making for an unpleasant experience in some seats.”

“We couldn’t be happier with the results since installing the Leopards,” continued Ritter. “The response is evened out now, so the FOH engineer has a realistic sense of what’s happening throughout the hall. And frankly, the whole system just sounded better out of the gate, so much richer and fuller. It’s a vast improvement in technology.”

Ritter cited Meyer Sound’s self-powered technology as one element of the sonic improvement. “With the old system, because of restrictions on where we could put the amplifiers, we had very long and uneven speaker cable runs, with a 75-foot longer run to one side. We never could get the two sides to sound the same.”

Since installation, the theater has experienced a noticeable uptick in the number and quality of acts booked. “We landed at least one major artist in here in large part because we had the Leopard arrays,” said Ritter. Acts using the system include Celtic Woman, Norah Jones, Art Garfunkel, Kris Kristofferson, Savoy Brown, and Dan + Shay.

Spokane’s First Interstate Center for the Arts, overlooking the city’s riverfront, was built for the 1974 Expo and was known as the Spokane Opera House until 2006. The elegant 2,600 seat venue has a very large proscenium stage well-suited to Broadway-style productions, but it also hosts regular concerts by national touring artists.

In 2008, the team at George Relles Sound had installed a Meyer Sound system based around MSL-4 point source loudspeakers, and the solution had served the hall well for a decade. However, as touring riders increasingly demanded the latest technologies, which required bringing in rentals when acts were not carrying their own production, the venue management decided to integrate a new Leopard line array system into a recent $22.3 million renovation project. However, because the new arrays can be easily flown or removed according to needs, the durable MSL-4 remains in place as a basic alternative when SPL and bandwidth requirements are less demanding.

“Basically, we wanted a system that would satisfy the touring riders, with Meyer Sound and two others on nearly all of them,” said Mike Tucker, the venue’s technical director. “But with Meyer Sound and George Relles, we knew we would be getting the best. And we are blown away with how good it sounds.”

The First Interstate Center system is nearly identical to the one at the Fox, except with four more Leopard loudspeakers—18 total—per side, plus one more LINA front fill for the wider stage.

Tucker also lauded the flexibility of the self-powered system, which can be easily removed and reassembled two blocks away at the Spokane Convention Center—also owned and operated by the Spokane Public Facilities District. “It gives the option to book in a whole different type of event, such as EDM concerts or other general admission shows, in the exhibit hall,” he said. “We can roll the arrays into the truck using three carts per side and have them up and be ready to go over there in a couple hours. It’s not only faster to set up, but we did our homework and found out the Leopards require less power than their competitors. It’s also amazing how light they are for self-powered boxes.”

Acts that have used the new system at First Interstate Center include Bela Fleck and the Flecktones, The Oak Ridge Boys, Lonestar, Hozier, STOMP, and 4U—The Music of Prince.