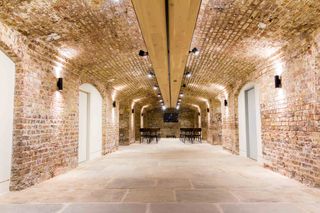 Originally constructed in 1808, Glazier’s Hall is characterized by a blend of refined tradition, contemporary design and one of the best locations in London. Sat beside the Thames, the building offers seven strikingly individual spaces for corporate events and functions. It also adjoins the historical London Bridge—a distinction made all the more tangible following the completion of the London Bridge Arches, a new subterranean space where the foundations of the bridge’s original wharf are visible. Beyond the bare brick walls of the venue flows the Thames, while within the acoustically challenging space, an almost invisible K-array solution delivers smooth and precise audio coverage.

Previously a back-of-house zone, the newly transformed space is the seventh function area available for hire within Glazier’s Hall, offering three long, arched vaults where original bricks are complemented by minimalist architectural lighting. At the far end of the vaults are the stones that adjoin the river, while to the right, visitors can gaze through three hermetically sealed windows at one of the British capital’s best appointed wine cellars. The overall effect is unlike anywhere else in the city.

“The building is actually Grade II listed–the floor is actually all original Yorkstone paving from 1808, and we are on a raft in the Thames,” said Glazier’s Hall Managing Director Samantha Enstone. “Our vision was to convert and use more riverside space and create a unique environment using the walls from 1808. But of course part of the challenge was to achieve the right balance of sound in an entirely brick, underground and very reverberant chamber.”

The company charged with delivering on that vision was lighting and sound specialist Technical Arts, whose founder and managing director, Chris Filippidis, has played a key role in shaping the building across a number of years. “Glazier’s Hall is a long standing client of Technical Arts,” he said. “Before this current phase of work we have been involved in lighting and audio throughout.”

“The architect, Andrew Lock of Lyn Atelier, provided the drawings and we instantly knew that we needed an audio solution that could provide highly intelligible coverage for BGM whilst remaining unseen by guests. This isn’t the kind of place where you can just put boxes on the wall. I’d previously heard K-array speakers when I visited with 2B Heard, and they seemed to be exactly the right solution.”

Visitors to the Arches descend into the space via two short flights of stone steps, then find themselves in the central vault. A long wooden raft, suspended from the ceiling, acts as a counterpoint to the stone and brickwork while also providing a home for lighting fixtures and extremely compact, well-hidden K-array Tornado-KT2C 2” speakers. To the left and right, two further vaults boast wooden rafts of their own, each housing four Tornado-KT2C speakers, for a total of 12 throughout the venue.

“Given the limited head height, the rafts needed to be physically as tight as possible with the apex of the vault–we needed to ensure the depth of the speakers wouldn’t bring the raft height back down again,” said Tarpy. “The Tornado-KT2Cs are ideal because they’re so compact. Then it was a question of matching the client’s expectations in terms of audio quality – the brief was for high quality and high intelligibility, primarily for background music that could move into a mid-ground performance–we needed plenty of headroom. Again, the Tornado-KT2Cs were the right choice.”

Low-end support for the distributed system is via three Rumble-KU26 subwoofers, all hidden behind custom grates to appear as though they are part of the ventilation system. “Given the space restrictions, the prospect of subwoofers was quite challenging, but that led me to the Rumble-KU26 subs—it’s impressive to have an enclosure that can deliver that kind of SPL but which is the size of a shoebox.” Signal distribution is via a Cloud Z4 mk4 zone mixer, with wall-plates positioned throughout the venue, while the loudspeaker system is powered and processed by a single K-array Kommander-KA24.

“It sounds really good,” Tarpy said. “Once the system was installed, 2B Heard came in and tuned it and the result was great. Particularly considering this is a relatively new relationship between us, the support from 2B Heard has been fantastic throughout.”

“Most of the arches in London are acoustically very poor,” said Enstone. “But when we held our launch event in here we hosted a long table of 40 guests, and it was stunning–I could hear the audio perfectly. You can’t see the system and you don’t know where the audio is coming from, but it still sounds great. The result in here is far better than I thought it would be.”