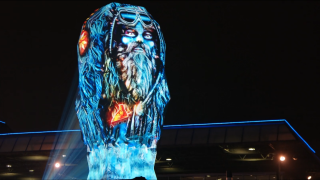 The many faces of 'Sviatovid'

In 2014, BARTKRESA Studio (BKS) began exploring 360-degree projection-mapped sculptures with Shogyo Mujo, which debuted at Burning Man in 2014. The company, which has continued to develop the sculptural new media art experience over the last five years, now presents Sviatovid, a 15-foot-tall faceted totem inspired by both a ninth century Slavic deity and a medieval sculpture of the same name.

The history of the deity and medieval statue of Sviatovid is the subject of debate among historians, but BKS took inspiration from the all-seeing nature of the figure. With four faces, Sviatovid was not omniscient, but could literally take in the world in an all-encompassing way. BKS designed a library of interactive animations to be a reflection of Sviatovid’s distinct perspective and journey.

Following its debut at ISE, Sviatovid traveled to Poland for an exhibition at the Centrum Spotkania Kultur (The Center for the Meeting of Cultures).

Sviatovid will be on display at InfoComm outside Hall E of the West Building at the Orange County Convention Center June 12-14. In addition to exhibiting Sviatovid, BKS’ Bart Kresa will give presentations on the art of projection mapping during the conference, as well as presenting at the TIDE Summit.

“The high level of design and production that we have achieved with Sviatovid—high brightness and superior picture quality, color saturation, dependability and a complete transformation of the sculpture—is something truly innovative and exciting,” said Bart Kresa, master projection designer and founder of BARTKRESA Studio. “We are grateful for the opportunity to collaborate with Panasonic and thank them for their dedicated project team that worked with us. They focused on evolving the technology while we focused on evolving the design.”

“Sviatovid is yet another very unique project we’ve had the pleasure of working with Bart on, so we are excited he’s chosen InfoComm for its U.S. debut,” said John Baisley, senior vice president, Professional Imaging & Visual Systems, Panasonic System Solutions Company of North America. “These PT-RQ32KU 4K+ laser projectors provide the high brightness and exceptional resolution needed to project on this intricate 3D sculpture which will provide a stunning visual at the show.”

Panasonic will be available at Booth 1300 to discuss its partnership with BARTKRESA studio as well as its new and innovative AV solutions.