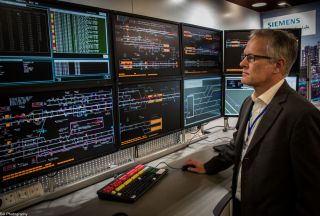 Siemens Rail Automation is a supplier of signaling systems to the rail industry worldwide. The signaling system is fundamental to the safety of a rail network as it maintains safe separation and prevents collisions. Thorough initial training and regular refresher courses in a realistic environment is essential to maintaining the signalers’ competency and knowledge of operating procedures. Siemens collaborated with Matrox to implement an IP-based simulation environment for their European rail-network client with an innovative use of streaming and recording of multiple video feeds.

A simulator allows a trainer to vary scenarios—changing the weather, introducing obstacles on the line, incidents in stations, broken-down trains, or other things that affect the scheduling of movement of rolling stock. The trainer needs to monitor a trainee’s reaction to a particular scenario as it transpires. To be able to view the entire session later for analysis and pinpointing areas of improvement, each individual trainee’s performance needs to be recorded as well.

The trainee operator’s signaling desk contains multiple monitors for the signaling application that shows, among other things, the state of the signals, dynamic speed limits, state of points on the track, and train positions. Additional screens from other collaborative applications, such as timetabling, are also displayed for the trainee. Trainers too have multiple screens where they define and manage the training scenario.

At the individual trainee stations, “operator” workstations host a Matrox multi-display graphics card to power an eight-monitor, 4x2 desktop configuration. In the same PC system are two Matrox Maevex 6100 quad 4K enterprise encoder cards. Capable of simultaneously capturing, streaming, and recording up to four 4K inputs, Maevex 6100 in this case captures quad 1080p inputs, composites them as a single 4K signal, and streams them to a collaborative video wall. Doing so ensures that the time correlation between the individual screens is not lost; a cursor moving across a desktop from screen to screen is seen as it happens. This is important for the trainer to get a realistic picture. A jerky or delayed cursor movement could be construed by the trainer as indecision or hesitation on the part of the trainee. If the cursor movement by the trainee—including between screens—is smooth, it is imperative for it to be seen live and recorded as being smooth.

In addition to the above are three dual-monitor timetabling workstations and a quad-monitor trainer workstation, each with a Matrox graphics card and Maevex 6100 encoder card to stream desktop content to the collaborative display wall. The timetabling workstations are used by trainee timetable planners to make on-the-day changes. One of the training objectives is to support the team working between the signalers and planners.

On the video wall are 12 monitors in several arrangements that enable the trainer to control the simulation environment and monitor trainee signalers and planners. The video wall can also be used collaboratively to replay and review the training session. This is all from a single, low-footprint Blue Chip Ultima 2M system that hosts a combination of Matrox Mura IPX decoder cards and Matrox Mura MPX input/output video wall cards, which work together to decode and display the various incoming streams. The rail network uses Matrox MuraControl for Windows video wall software to manage the incoming IP sources, presenting the information on the wall in a way that looks like the original setup at the trainee’s desk. These “video wall copies” allow trainers and other decision makers to remotely and instantaneously see the trainee’s reaction to a given situation. Desktop views are easily switched between trainees. Additionally, Maevex 6100 allows training sessions to be simultaneously recorded to network storage from where the simulations are played back on demand to the individual trainee, or to other interested parties.

Siemens Rail Automation has deployed the IP-based signaling simulator as part of a major project in a leading European-rail-network organization where it is performing in line with the rail industry’s stringent standards. Similar deployments for other clients are being planned.

“Using Matrox’s video wall and streaming and recording technologies has been instrumental to the successful implementation of this pioneering IP-based signaling simulator in our client’s organization,” said Andy Powell of Siemens Rail Automation. “Without Matrox, this clearly wouldn’t have been achievable.”

Using the standard network to stream the various elements of the simulator in real time has offered many benefits to the client. The video wall displays copies of the trainer’s own screens, as well as a selected trainee’s screens. This IP-based implementation is easily scalable and allows multiple trainees to be participating in the same training session—with the trainer able to select which trainee to be overseeing at a given time.