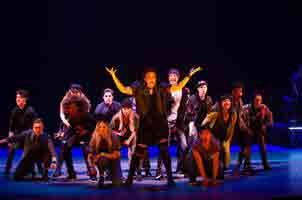 The American Repertory Theater at Harvard University (A.R.T.) and sound designer Jonathan Deans selected the Shure Axient Digital wireless microphone system and ADX series transmitters to provide clear and precise audio support for the world premiere of the rock musical, “Jagged Little Pill.” The high-energy musical is inspired by Alanis Morissette’s Grammy-winning 1995 album of the same name. The stage adaptation incorporates songs from Morrissette’s catalog, plus new material into an original and timely story. The production’s audio team sought Shure’s sound performance to ensure the audience would experience every lyric in a new element.

Tasked with creating an audio experience that matched the quality of the Grammy-winning Album of the Year, the Axient Digital wireless system, Shure PSM 1000 Personal Monitor System, and Wireless Workbench 6 software worked to match the physicality required of the actors without sacrificing critical audio standards of quality, clarity, and tonality.

“From an audio standpoint, I wanted this production to be as clean and as pure as possible to replicate the sound of the album,” said Deans, sound designer for “Jagged Little Pill.” “Shure Axient Digital is so clear that it feels like the microphones are wired, and the ADX micro transmitters were distinctively designed with performers top-of-mind, evidenced by the incognito bodypack that can comfortably perform night-after-night in an intensive production. The system allowed me and my team to essentially not think about the audio when the curtain went up, which is a tremendous benefit. We had full trust in its consistent performance and flexibility during this complex show.”

With the American Repertory Theater located in the heart of Cambridge, engineers also required a solution with an adequate wireless channel count that would accommodate a densely-populated area while still producing audio quality.

“We’re running about 40 channels with 50 band inputs that make up the ins and outs of the production,” said Mike Tracey, production mixer on “Jagged Little Pill.” “To have the channel flexibility and range across this shrinking RF spectrum is critical to the quality of our play. We have over 20 performers at a time, including actors and musicians, wearing wireless microphones, and Axient Digital paired with the Wireless Workbench software goes above and beyond our demands.”

The show explores a number of dramatic topics, depicted through taxing physical performances that require specialized equipment for the performers.

“The internal transmitter antennas are a critical feature for a show like this, where the actors are performing intricate choreography and frequently changing costumes,” said Alison Schaefer, production audio technician at A.R.T. “It’s one less external point of failure we have to deal with, and we’ve had actors get so comfortable wearing the micro bodypack transmitter that at times they’ve forgotten that they’re still wearing it,” she said.

The success of Axient Digital has inspired the A.R.T. to obtain additional channels for future shows.

“We were incredibly pleased by the performance of Axient Digital that we plan to purchase 24 channels with 11 AD2 Handheld Wireless Microphone Transmitters and 22 ADX1M Micro Bodypack Transmitters,” said Sam Lerner, head of sound at A.R.T. “The micro bodypack was the bread and butter of ‘Jagged Little Pill.’ All the performers wore one, and night after night it performed flawlessly.”

“Jagged Little Pill” debuted at the American Repertory Theater on May 5, 2018, and completed its run at the theater on July 15. The musical sold out 79 performances at the A.R.T.