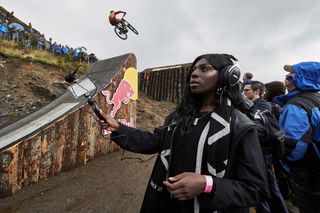 Shure and Red Bull have partnered to reengineer audio recorded at live events into a thrilling musical adventure. Executed during the latter half of 2018, Shure worked alongside Red Bull to arm three up-and-coming producers with the newly launched MV88+ Video Kit to capture the sounds from three of Red Bull’s sporting events. The result is “Soundscapes.”

“Sound at sporting events is often taken for granted, or viewed as an afterthought. However, when you think about it, footage from live sporting events would be nothing without audio—skaters weaving through a course at record speed, cheering crowds, the split-second swerves, kicks, grunts, jumps, and falls. These are the moments that make an experience truly exciting,” said Paul Crognale, manager of global marketing, musician and consumer audio at Shure. “The need for exceptional sound in sports is undeniable, and challenging in such conditions. Through this campaign and partnership with Red Bull, we’re able to bring extraordinary experiences to life with the MV88+ Video Kit.”

The MV88+ Video Kit, Shure’s latest addition to its MOTIV line of digital microphones and portable recording solutions, was used by each producer to capture audio. The producers leveraged the all-in-one solution to record professional-quality content on-the-go, transforming the three Red Bull events into more than just a visual spectacle. The highly immersive audio recordings provide a “you are there” experience, offering listeners the opportunity to see, feel, and hear each and every gut-wrenching aspect of the events. The MV88+ Video Kit includes a Manfrotto PIXI tripod, phone clamp, and mount as well as iOS and USB-C cables for next-level compatibility and connectivity.

The three producers attended three of Red Bull’s most iconic events across the globe to create three unique soundscapes using the MV88+ Video Kit, recording moments from each spectacle. NTS Radio regular Anz kicked things off at the Red Bull Hardline in Wales, capturing the sounds and excitement of one of the toughest mountain bike races in the world. Up next was Red Bull’s Air Race in the U.S., which brings together the world’s best racing pilots. South London producer/DJ Shy One recorded the unique soundscapes of race-planes hitting speeds of nearly 240 miles per hour, mixing them into an ear-catching track. In Japan, Coconut Beats head HAAi recorded audio from the Red Bull Crashed Ice. She captured split-second sounds as athletes dropped, hair pinned, and turned at speeds of up to 50 miles per hour.