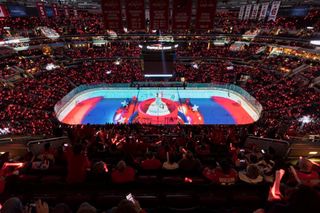 Fan engagement was top of mind for Monumental Sports & Entertainment as two of its teams, the Washington Wizards and Washington Capitals, headed towards the 2018 playoffs. Monumental engaged Quince Imaging to create a fan experience, and using Christie technology, Quince Imaging installed a dual-sport projection system that rallied fans and teams alike with a projection mapping show, all the way through to a Stanley Cup championship for the Capitals.

“With an arena renovation coming up, our goal was to enhance the fan experience and we have always had the projection system at the top of our list,” said Hunter Lochmann, MSE senior vice president of marketing. With both the Wizards and Capitals having tremendous seasons, Monumental decided to temporarily install the system for the playoffs, and permanently install it during the off-season.

The system had to be capable of projection mapping on ice for the Capitals and on the hardwood court for the Wizards, and adjust to the different size of each surface. It also had to be turnkey and include the projection technology, content, and 3D visuals.

“Monumental Sports wanted to have not only a permanent installation, but they also wanted to have something immediately for the playoffs. And that’s something we’re uniquely capable of doing: quickly installing a rental system of 12 Christie Boxer 4K30 for the playoff run for the Capitals and the Wizards, while working with them longer term on the permanent installation coming up this fall,” said Eric Gazzillo, producer, Quince Imaging. In addition to the Christie projectors, Quince also used Christie Pandoras Box with Widget Designer, Christie Mystique Install Pro Venue Edition and Christie Terra.

With just a couple of weeks’ notice, and only one day on site to set up, Quince cites the Christie technology for the quick turnaround. “The one key thing that helps us meet these deadlines consistently is having products like Christie Pandoras Box and Boxer projectors. We know how they work. We know we can rely on them to deliver what we expect – that’s why we like it,” said CJ Davis, creative director, Quince Imaging. “It always comes down to schedule: being able to get things up fast and efficiently and being able to set up Pandoras Box, the projectors and do the alignment in an efficient manner,” said Gazzillo.

Quince Imaging is using a full suite of Christie solutions including Christie Mystique Install Pro Venue Edition to keep the 12 projectors in continuous alignment; Pandoras Box, which enables a quick transition between the court and ice; and Christie Terra controllers, transmitters, and receivers. Terra is a solution to transport, process ,and control bright, uncompressed 4K content. Said Gazzillo, “When you go from hockey to basketball – say we’re just doing a basketball set up, we want to make sure the court is 4K resolution. When we go to hockey, and you think about just cropping down to basketball, you lose a lot of that resolution. So to avoid that, we’re running all of the Boxer 4Ks at their native 4K resolution and we’re using Terra to make sure that the signal is uncompressed 4K all the way through. So when we shrink down to the much smaller surface of the court, we’re still getting the full 4K resolution on the court thanks to Terra.”

Gazzillo said of Christie Pandoras Box that, “The real time compositing and warping tools of Pandoras Box ensures that, from an operations standpoint, it’s really just a few button clicks to transform. Once you lay down that canvas of pixels and light across the whole rink, and then quickly switch over to basketball, you are harnessing the power of Pandoras Box to transform it into a basketball arrangement. For the playoffs, Pandoras Box Widget Designer was crucial. Changes on the fly, going through player headshots, going through player line-ups. That’s all Pandoras Box, but also harnessing the power of Widget Designer to make it seamless and quick for game day operation.”

Quince Imaging also used Widget Designer to connect to the scoreboards and ribbons with the projection mapping content on the ice or court for a content “takeover” of the entire arena with a single button push. Also with a single click, Christie Mystique Install automatically warps, blends, and aligns the content across all 12 projectors in a matter of minutes to ensure that the system is always perfectly calibrated and game-ready, eliminating the need for labor and several hours of dark time to manually adjust the system.

“Feedback from both teams on the projection was tremendous, especially with the Stanley Cup win by the Capitals,” said Lochmann, adding that, “We were very happy with all of our 3D capabilities during the playoffs, including the Christie solutions.”