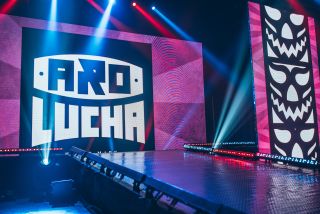 Created to bring the high-energy of Lucha Libre professional wrestling to the United States, the sports and entertainment media firm Aro Lucha produces a number of exciting live events and television productions. Led by founders who have already achieved success in the professional wrestling industry, the production team understands they must create a dynamic environment that can match both the passion of the fans and the wrestlers taking the ring. Working with their partners at UNO Branding, Aro Lucha decided to enhance the impact of their design even further with the addition of a high-resolution video wall using a FLEXCurtain HD 6.25mm LED video solution from PixelFLEX.

“This is a relatively new production design as we only started the company in late 2017,” said Jason Brown, Chief Executive Officer, Aro Lucha. “When we decided to launch the promotion, we wanted to focus specifically on Lucha Libre and its popularity in the United States. To do this, we needed to create the same sense of excitement that our fans grew up seeing in Mexico. With our backgrounds in professional wrestling production, we have always relied heavily on LED video, so it was a natural choice for us to bring the FLEXCurtain HD into our design.”

The FLEXCurtain HD is a lightweight and flexible LED video screen ideal for high resolution video playback and video effects for indoor and outdoor applications. Its hi-res LED video can be driven by any DVI output, and the multi-directional, flexible design of the FLEXCurtain HD makes it easy to store and transport. FLEXCurtain HD is 60-90% lighter than the competition, and using the quick-lock system, 500 square feet of FLEXCurtain HD can be setup and broken-down in under 15 minutes.

“To give our fans an authentic taste of home, we needed a bright, colorful environment filled with action, music and entertainment, all rooted in the Hispanic and Latino culture,” continued Brown. “Our two founders, Ron and Don Harris, had both worked with PixelFLEX in a live event environment, and we were familiar with their work in the touring industry as well. We have always felt that we needed to surround ourselves with experts, and the team at PixelFLEX was no exception.”

Ready to implement the new LED video wall into the high-energy environment, the production would now be able to create an even deeper level of intrigue for the fans. In a world where the characters are the true stars, the FLEXCurtain HD system would clearly showcase the Luche Libre story.

"At our events, we set up the FLEXCurtain LED wall behind the entrance staging elements, so as a wrestler is announced and comes on stage, they are standing in front of the high-definition video,” said Brown. “During this time, it is typically playing their entrance visuals, and then we also use it for our own show storylines and content. At the end of the day, we are storytellers and there is simply no better visual than a large, high-definition LED video screen.”

As with many sports and entertainment productions, corporate sponsorships are a key component to the success of the program. By implementing the FLEXCurtain HD LED video wall into their event design, Aro Lucha is now able to offer their partners a dynamic, visual medium to heighten consumer interest and engagement.

“We do rely on the FLEXCurtain HD to assist with our internal branding, as well as integration into our sponsorship programs,” added Brown. “To be able to play their graphics and branding assets on the HD screen really gives them a significant presence at our live events to reach our audience. With so many advertisers looking to interact with the Latino and Hispanic community, this is a great way for us to create an impact for their brand in front of our ticket-buyers.”