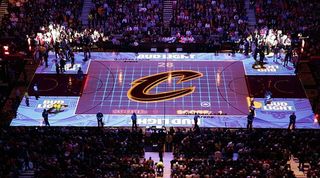 CAVS motion tracking in action
“We introduced the interactive games because those are attractive to the fans, who will then put the experience on Instagram, Facebook Live, and other social media sites. We try to get something unique to get the fans excited, get them tweeting and putting it on Snapchat,” Gazzillo added.

The Quince Imaging team continues to develop additional programming for the on-court entertainment – keeping the fans’ focus on the court during the pre-game, timeouts, and halftime.

“We started with player tracking and it has grown over time to getting not just the players tracked, but getting the fans engaged as well – like with the pong-like game,” said Gazzillo. “It’s been a huge hit and we’re still finding out the many things Pandoras Box can do for us and are using it more as time goes on.”