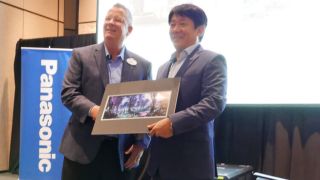 Randy Dearborn, Senior VP of Technology, MGM Resorts showed examples of Panasonic’s partnership with MGM Resorts in Las Vegas– that owns and runs most of the high end hotel/casino properties on the strip in Las Vegas. MGM Resorts alone has 42,000 hotel rooms in Vegas, and 50 Retail outlets Dearborn explained that gaming is just 30% of what MGM does, with retail, hotel rooms, entertainment, and other non-gaming activity accounting for 70%. Dearborn said that, with Panasonic’s help, they putting much more resources into: AV integration, new sports books, AI digital concierges, and using data to better food & beverage distribution.

But it would not be InfoComm if great products were not on display. Panasonic is showing at their booth:

Balloon Cam
The balloon cam combines a drone with the hovering capability of a large balloon for a unique video platform. With unique shooting angles the balloon cam can be used to enhance the fan experience at sporting and other stadium events.

LinkRay
Panasonic’s LinkRay is a proprietary visible light communication technology, which enables smartphones with a dedicated app to access information emitted in signals from LED transmitters. Information can be downloaded and displayed in the user’s native language, augmenting visitor experiences in spaces such as theme parks, museums and galleries, as well as retail environments. The first U.S.-based museum installation can be seen at the Petersen Automotive Museum in Los Angeles, CA.