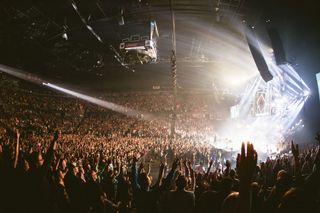 Packing 14 shows into 19 days with a roster of performers that frequently varied from show to show, the tour presented its share of production challenges in terms of both audio quality and basic logistics. However, sound provider Special Event Services (SES) of Winston-Salem, NC was ready for the task with its L-Acoustics K1/K2 PA system.

“The artists on this tour ran the gamut from folky singer-songwriters to pop/R&B acts to full-out screaming amps and drums rock—and the lineup was hardly static with various groups stepping in and out depending on other performance obligations,” said SES Director of Touring Michael Brammer. “Thankfully, the K1/K2 system was ideal because it transparently reinforces all types of music.”

But the biggest sonic challenge was neither the lineup nor diverse musical styles.

“The hardest kind of content to provide sound reinforcement for is spoken word, hands down,” Brammer said, noting that one of the highlights of every tour stop was a message presented by Pastor Brian Houston. “This is where the L-Acoustics system really showed what it’s made of. Not only did the music sound great, but every word from the pastor could be heard clearly in every part of every venue. And these were not small shows. The average attendance was more than 10,000 people per night. SES has used L-Acoustics products—and specifically the K1 and K2 systems—for enough shows with enough artists covering an incredibly diverse range that the choice of K1 and K2 for OUTCRY was obvious to us from the beginning.”

Described by some as a touring Christian music festival, OUTCRY is best seen as the latest version of the traveling revival shows that have been a staple of American Christian culture since the early 19th century. OUTCRY has a rotating list of artists because the focus is not on the artist; rather, an OUTCRY show is a modern evangelical service with a worship band and pastor and scaling it up size and content-wise to fill an arena.

Most of the artists on the OUTCRY Tour are actually worship bands in mega-churches across the globe, from Sacramento, CA (Jesus Culture) to Atlanta, GA (Passion) to Charlotte, NC (Elevation Worship) and all the way down to Sydney, Australia (Hillsong Worship). By gathering together, they were able to draw over 120,000 on this first leg of the 2016 tour alone.

PA for the spring tour consisted of 12 K1 plus K2 per side for main hangs with an additional 14 K2 per side as audience sidefills. Low-end reinforcement was delivered by 16 SB28 ground subs, while six Kara provided frontfill from the lip of the stage. A total of a dozen LA-RAKs, each loaded with three LA8 amplified controllers, were called upon to power and process all loudspeaker systems.