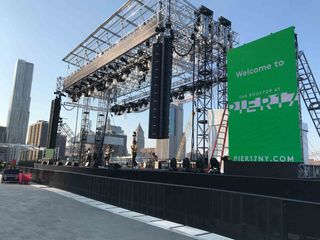 The Howard Hughes Corporation (HHC) recently opened the doors on a new development located in the South Street Seaport district. Pier 17 offers dining, retail, and entertainment options along with a large 1.5-acre rooftop concert space that can hold 3,400 for its standing general admission shows, or 2,400 seated, with the Brooklyn Bridge as the stage’s backdrop.

HHC brought in SIA Acoustics to identify and design a system that would deliver pristine audio quality while keeping the sound contained to the listening area. After reviewing multiple products, it was determined that an Eastern Acoustic Works (EAW) adaptive sound reinforcement system was the only solution. It would not only reduce the amount of audio that would impact the adjacent neighborhoods — Wall Street to the west and Brooklyn to the east — but also produce sonic clarity beyond expectations.

In turn, SIA Acoustics worked closely with Harrisburg, PA-based Anderson Audio and TMG Systems, who teamed up for installation of the system. Left-right Anya arrays were hung in single columns of 12 Anya modules, approximately 35 feet from the ground, along with 24 Otto subwoofers laid out in pairs, to blanket the rooftop.

“In my opinion, there isn’t another system out there that could do this,” said Chris Anderson, owner of Anderson Audio. “Each Anya enclosure has 22 channels of digital signal processing and amplification driving 22 transducers. Multiply that by 12 modules in each array, and you have the control to really dial it in, so it delivers exactly what is needed, where it is needed.”

“The neighbors are happy,” said Mark LaBouff, national sales manager, TMG Systems. “It’s very impressive when you walk in and out of the coverage area – the difference is incredible. There are two VIP areas technically ‘out of the coverage’ and it’s quiet enough to make a phone call. There were also some concerns about sound levels behind the stage traveling across the water to Brooklyn. Also, not a problem — the rear rejection of the system is substantial.”

“We found that EAW's Adaptive Anya loudspeakers and Otto subwoofers were the combination that would help dramatically control coverage of sound, provide an impactful and tonally balanced sound to the audience, and be acceptable to most touring bands,” said Sam Berkow, owner of SIA Acoustics. “So far everyone is in complete agreement.”