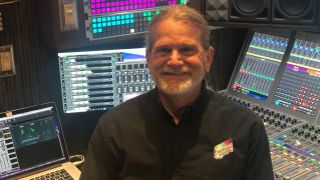 Broadcast audio engineer Jeff Cohen (the Super Bowl Pre/Post, Orange Bowl Halftime, NCAA Basketball) chooses Waves plugins and Waves SoundGrid for NFL broadcasts. Nine-time Emmy Award winner Jeff Cohen is owner and senior engineer at DigiMAXX Productions and has over 30 years of experience designing and mixing audio for live events and broadcast productions. He remarks, “I mix an NFL game every Sunday, starting with a preseason game and in alternating years, one divisional playoff game. This year we will go until week 17. Most of the Waves equipment in the truck is owned and rented to FOX by DigiMAXX Productions, and we use Waves in two different ways on our NFL show. One is for post-production and includes ProTools, which is used for editing packages built by our onsite video editor, and the other is for real-time, on-air mixing.”

The setup also includes an additional Lenovo PC running Spot-On music software and an additional MacBook Pro running other music and sound effects from Soundboard. The Mac also runs Dante Virtual Soundcard and the Lenovo runs AES through a Digigram Cancun. Additionally, there is a Windows computer with the Calrec, which also runs RTS ADAM AZedit and IPEdit software for communications, as well as the Calrec Artemis operating system. The broadcast truck features Neumann KH-120 monitors with a Genelec 7050 Sub. There are also additional speakers for PFL, hot mics, and overhead speakers. “It was built to be ready for immersive monitoring,” Cohen said.

The truck is running multiple Dante networks, a Calrec Hydra 2 network, and a Waves SoundGrid network. One Dante network is with the truck and runs all of the communications using RTS Omneo and Studio Technologies communications devices as well as microphones connected directly to the Calrec though a Dante I/O card. The team uses Studio Technologies’ Dante Announce Consoles and OnAir Belt Packs for on-air talent along with Shure Axient RF for the field reporter, as well as six RF Klover Parabolic microphones with Neumann KM 183 and 184 microphones. Other field mics include Sennheiser 416s, 8070s, 816s, and MKH70s, along with Shure VP88s for the crowd. The second Dante Network includes the ProTools computer, Mac Music Computer, the RedNet 6 (connected to the Calrec MADI I/O) and a Calrec Brio effects submix console. The Brio is also connected through the Calrec Hydra2 Network.

For the announcers, Cohen and his team uses Waves SoundGrid on individual inserts as well as group inserts. For each announcer, they use the Waves Scheps Omni Channel, F6 Floating-Band Dynamic EQ, and then the SSL E-Channel. “I prefer to use the dynamic EQs for the announcers,” Cohen said. “In sports broadcasting, with announcers using the HMD 27 headsets, mic placement is very important to the sound quality. While at AES, I heard Andrew Scheps speak and do a demo with his Omni Channel plugin. He was describing using the de-esser in a way other than on the high end. He spoke of how it was purposefully full range and not limited to just the high end. I immediately put this into effect to reduce the excessive low mids, but only when above a threshold. If you use a standard EQ, you are removing the frequency no matter what. The use of dynamic EQs and the de-esser dramatically improves the audio quality in a very dynamic way. When something is out of bounds, it is adjusted.”

The team also uses the Waves Dugan Automixer on all of the announcers to minimize background noise coming in from the mics. The IFB (Interruptible Fold-Back) mixes are preprocessing and the inserts go to air. On the Announcer subgroup, they use a Waves SSL G- Master Buss Compressor to hold things in line. “The quality of this buss compressor is so good and a great addition to the signal chain,” Cohen said. “This is the final stage of maintaining announcer levels and delivering -24 LKFS (loudness, K-weighted, relative to full scale) levels in a live environment. We also use the Waves WNS Noise Suppressor to try and remove a bit of the stadium ambiance as well.”

For the LFE, Cohen and his team uses Waves’ Submarine for Subwoofer enhancement. “We used to use a DBX 120a Subharmonic Synth, but it was not available to us any longer,” he said. “I had to look for an alternative. Before Submarine came out, we used Waves LoAir and experimented with Renaissance Bass and MaxxBass. That worked OK, but Submarine is delivering exactly what we were looking for. We use it to add subharmonics to graphics, music and other enhancements. I am very impressed with the effect this has on our final product and the quality of the LFE.”

The team also uses the Waves WNS Noise Processor on the effects submix to try to remove some of the stadium ambience. “We look to get as much of the field sounds as possible,” Cohen said. “Hits, whistles, and other sounds from the field bring the viewer into the stadium and closer to the action. We also fight with the PA. It is excessively loud in some stadiums now, and anything we can do to bring out the field sounds is highly desirable.”

In the ProTools world, the team uses the DTS Neural Surround Collection up mixers to create a 5.1 mix from stereo elements. “This year is the first year we have gone to 5.1 for most tape elements and archival,” Cohen said. “So previous elements as well as the music and sound effects need to be upmixed to the 5.1 environment. If we stay in this environment, the quality of the surround product, delivered to the home, is much better and less of a distraction.

“Using Waves has allowed me to use outboard processing that I do not have with the console by itself. It provides the ability to use devices that, in the past, had to be hardware devices. For example, we used to have an analog hardwired version of the Dugan on our show; now it is all software. Having all of these tools at my fingertips allows me to create a mix and solve mix related issues without the addition of external hardware. We now have all of the tools to create a consistent, high quality mix, bringing additional intelligibility and defined field sounds while creating the 5.1 surround canvas all in the box.