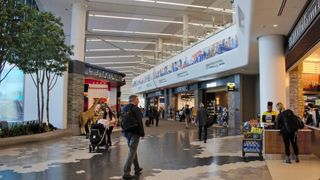 CobraNet and Dante protocols can be easily integrated via a network bridge, which MKJ deployed in its $4 million-plus overhaul of terminals B, C and D. (Image credit: MJK.John Massaro)

When MKJ Communications started engineering and installing critical communications systems in large public transportation hubs such as LaGuardia Airport, the most current audio distribution solution utilized CobraNet technology to deliver audio and video signals over IP networks. For many of these projects, MKJ relied on AtlasIED’s extensive portfolio of CobraNet-compliant communications products.

While MKJ’s affinity for AtlasIED GLOBALCOM.IP communications solutions hasn’t changed, today, the company’s choice audio-over-IP mass communications system follows the newer Dante protocol. “Not that there’s anything wrong with CobraNet,” says Massaro. Many of MKJ’s large transportation projects still function admirably via the CobraNet-based communications platform. But when airports and other transportation facilities update or add new terminals, it’s the ideal time to migrate to a new and more modern audio-over-IP standard like Dante. “The technology has strong backing of more than 2,000 products from more than 400 manufacturers, including AtlasIED, and any new products developed in the future are likely to adhere to Dante,” Massaro says. Moreover, the transition to Dante as the de facto audio-over-IP standard may eventually leave systems integrators with fewer and fewer CobraNet options.

Still, CobraNet has its place—and that place currently is throughout many of the existing terminals at LaGuardia Airport in New York City, continuing to seamlessly connect microphone stations, processors, amplifiers, and speakers for efficient multichannel distribution of digital audio. “In the few existing terminals left at the airport, CobraNet continues to facilitate distribution of critical communications for boarding, paging, and emergency notification,” says Massaro. “In transportation facilities like LaGuardia, where upgrades happen infrequently and systems are used for 20 years before they get replaced, CobraNet is still relatively popular. But when areas of the airport do undergo a major renovation, it makes sense to install that latest technology, which today is Dante.”

Fortunately, the two protocols can be easily integrated via a network bridge, which MKJ deployed in its $4 million-plus overhaul of terminals B, C and D. Equipment comprising the new gate paging and flight announcement systems installed in these terminals are all Dante-compliant, and from AtlasIED’s GLOBALCOM.IP portfolio. Thanks to the networking bridge, the Dante systems can interoperate with the CobraNet equipment used in the other existing terminals and concourses, creating one unified communications network.

“To airport personnel, the only noticeable difference between the two systems is the lower latency of the Dante network and the intuitiveness of the Dante controller’s graphic user interface,” says Massaro. “Digital audio signals traveling from microphone to speaker happens with near-zero latency and airport staff are able to master the communications controls faster.”

The GCK 3.0 software also supports customization and automation of messages. “Through the software we can steer announcements to certain amplifiers, play back recorded messages in any language, automate the boarding process, and convert text messages to speech, for example,” says Benny Ameti, MKJ senior engineer. This helps with ADA compliance, a feature unique to GLOBALCOM.IP.

Because Dante facilitates the distribution of both digital audio and video signals, MKJ was able to also implement innovative visual messaging solutions that complement audio broadcasts. For example, to help travelers with hearing impairments, digital signage automatically displays messages being broadcast audibly. This same signage can be used for wayfinding applications, like directing people to the nearest airport exit during an emergency.

Legacy and leading-edge technologies like CobraNet and Dante can co-exist peacefully, as MKJ demonstrates in the initial phases of its communications upgrade of several terminals at LaGuardia Airport. For markets like the transportation industry, which roll out expansion projects in multiple phases, being able to bridge old and new communications networks keeps the facility operating at full capacity while the upgrades are rolled out. No matter which Dante-based AtlasIED amplifiers, microphone stations, controllers, and communications endpoints MKJ installs, audio broadcasts can be shared seamlessly between the existing CobraNet-based network and new Dante network.