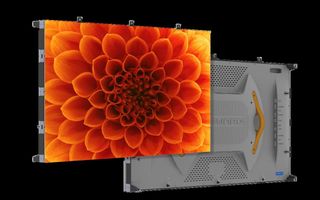 Available now in 1.2 and later this year in 1.8 millimeter pixel pitches, the Leyard TWA Series will, according to Planar, "deliver the pixel density and form-factor similar to LCD and rear projection video walls, but with a seamless image that can be configured to nearly any size." The 54-inch flat panel design offers image quality and 24x7 mission-critical reliability, along with energy-efficient LED video wall designs.

Leyard and Planar are showcasing the Leyard TWA Series at InfoComm 2016 in an 8K installation of 64 individual Leyard TWA Series 1.2 millimeter pixel pitch displays. In addition, the booth will feature a technology demonstration of a 4K LED video wall comprised of ultra-fine pitch 0.9 millimeter displays.

The Leyard TWA Series is a flat panel LED video wall display offering a slim 54-inch cabinet and the finest pixel pitches available on the market today. The result is a pixel density and form-factor to rival LCD and rear projection video walls, but with a truly seamless solution that can be configured to nearly any size. The Leyard TWA Series is designed with a 16:9 aspect ratio compatible with most displays, making content development and video wall processing easier right out-of-the-box.

Leyard TWA Series LED video walls use an average 35 percent less power than conventional LED video wall displays, making it among the industry’s most energy-efficient LED video wall solution. The Leyard TWA Series also delivers a crisp, high contrast image that uses the highest quality black LEDs, black solder mask and MicroGrid Shader to achieve the deepest level of blacks.It is designed for high reliability, long life and ease of service, built to operate around the clock and is available with redundant power supply and video source options to ensure uninterrupted operation in the event of a failure. Individual displays can be quickly serviced on-site. The larger 54” size means fewer displays are needed to create a video wall, reducing potential points-of-service.

“The market for sub-2 millimeter direct-view LED displays grew an unprecedented 366 percent in 2015, making it among the fastest growing categories in the video wall category,” said Sanju Khatri, director of digital signage and professional displays for the industry analyst, IHS Technology. “The category is expected to continue into 2016 with a robust 84.8 percent rise in shipments forecasted. Leyard is a pioneer and a market leader in this category, having sold more fine pixel pitch LED displays in the past three years than any other brand.”

The Leyard TWA Series joins several other high resolution display innovations that will be showcased by Leyard and Planar at InfoComm 2016, including:
•A technology demonstration of an 8K native resolution 65” LCD display for pixel-free viewing even at close viewing distances.
•The launch of Clarity Matrix with Extreme Narrow Bezel, a 55” LCD video wall system with the industry’s smallest tiled bezel width of just 1.6 millimeters
•The newly launched Leyard CarbonLight LED display solutions, a family of flexible, lightweight displays uniquely constructed of carbon fiber for rental and staging and fixed installations in broadcast, corporate and exhibit spaces.
•Next-generation Planar UltraRes™ Series 75-inch, 84-inch, and 98-inch Ultra HD resolution LCD display
•Planar EP Series of high-performance 4K LCD displays, offered in sizes ranging from 50 to 65-inches and engineered from the ground up for demanding 24x7 commercial environments.

Leyard and Planar’s display innovations will be on display at InfoComm 2016 in Booth #C7736.