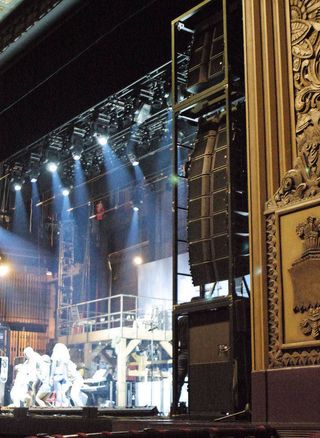 LA Rent Backstage
According to Associate Sound Designer Mike Tracey, the touring sound system for RENT comprises two main left/right towers of 11 Kara enclosures per side, as well as two SB18 subwoofers per side, arrayed in a cardioid configuration. Discreet coaxial 5XT speakers provide front fill, while two X12 coaxials provide down fill. This is all powered by six L-Acoustics LA8 amplified controllers in an LA-RAK and controlled via an LA Network Manager. Two spare LA8s are also in the rack but, underscoring their reliability, have yet to be used. Masque Sound, which also provided a Yamaha CL5 console for front of house, is the sound-reinforcement provider for the show.

“RENT is a rock musical, and it really needs a rock touring sound system, and that’s what the L-Acoustics Kara gives us,” said Tracey, who has also worked on other successful touring and Broadway productions, including Book of Mormon, Cabaret and War Paint The Musical. “The Kara is a compact, lightweight box but it can really pump out the sound. And the 5XT boxes are amazing—I don’t know why anyone would use anything else for front fills.”

Tracey drew up the system design in L-Acoustics’ Soundvision 3D modeling software program using his team’s knowledge of the theaters that are on the tour itinerary.

“We have a good understanding of the baseline of the venues we’re going to, and Soundvision let us design a system that would work for all of them and was also as lightweight to carry as possible, which makes a big difference in costs,” he explains. “The Kara boxes are about 50 pounds each and put out a huge amount of power for their size and weight. And they’re very easy to fly.”

He is also a fan of L-Acoustics’ technical support.

“They are just great—we had Jesse Stevens with us for the final tuning of the system,” he says. “For a touring show, it’s a huge confidence builder to know that anything you need is just a phone call away.”

Mike Rukstad, the show’s FOH mixer and head of audio, says the Kara system puts RENT into the category of a rock concert as well as a theatrical show.

“We’re playing some pretty big houses—three and four thousand seats—and no matter how big the theater or how it’s configured, Kara can fill it,” said Rukstad from the 2,700-seat Hollywood Pantages Theatre in Los Angeles, one of RENT’s tour stops. “I can always get the vocals above the band, and we have a pretty loud drummer!”

Rukstad, who has also mixed Buddy: The Buddy Holly Story and Bullets Over Broadway on tour, says the L-Acoustics system is a high-fidelity experience for theatergoers.

“It’s really all about the power and the clarity,” he says. “It sounds good. There’s no distortion, nothing that distracts from the music.”