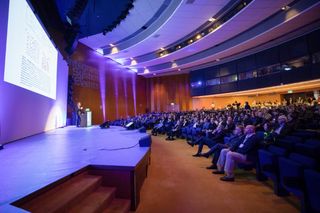 Integrated System Europe (ISE), the biggest and most successful AV trade show, returns to Amsterdam this week (Feb. 5-8) with a record-breaking 80,000 AV professionals—from manufacturers to end users and everything in between—descending on the Dutch capital.

“It’s going to be bigger and better than ever before,” beamed the show’s managing director and founder, Mike Blackman, in an all-too-familiar pre-show message. “I know I make the same claim every year, but it’s true. It always is. This will be its biggest year ever.”

Now in its 16th installment, 15 of which have been at the RAI, demand for the show—both exhibiting and visiting—continues to grow at a privileged pace.

But size is simply circumstantial of the value the show creates—something Blackman and his team work hard to ensure ISE remains a pivotal event, leaving a meaningful and lasting impression on all those that attend.

“We’ve been very fortunate that ISE has become a date in the calendar and the stage for many of the world’s leading manufacturers to unveil their latest products,” said Blackman. “If you’re in the channel and want to keep up to date, then ISE is absolutely the place to see what’s happening, what’s new in the market and what’s coming.”

It’s not just AV professionals in Europe making the trip.

“Last year I met a lot of U.S.-based integrators at the show and asked them what they’re doing here,” Blackman continued. “They explained that because business is moving so fast, they need to be at InfoComm in June and at ISE in February to keep themselves ahead of the market.

“For end users, they need to understand what’s happening in the marketplace and its potential. They should be buying rather than being sold to. The best way to be a competent buyer is to get informed about what’s possible.”

Visiting exhibitor stands, while crucial and hugely beneficial, is of course not the only role of ISE or a dominant factor in what brings visitors to the show.

ISE (for those new to the show) provides significant opportunities for AV professionals to expand their own knowledge and indeed their imagination about how AV solutions can be deployed and the benefits they can provide.

As is standard for a trade show, this is typically provided through the manufacturers directly, or (for a more independent view) from organized events from ISE itself.

“The exhibition is like a magazine in that it has two parts: there is editorial content and there is advertising,” explained Blackman. “For us, the exhibitors are the advertisers. They create content and provide information within that, but obviously most of that is biased toward their own products and solutions.

“For ISE, as the organizers, we have an obligation to provide neutral content and to be the place where they—the AV professionals—are able inform themselves and then go out and learn more as they go around.”

Throughout the week, ISE has organized a host of full-day and half-day conferences designed to appeal and to “inspire” attendees, enabling them to learn from the experts and bring back ideas that can be applied into their own business.

“I’d really advise participation in the conferences,” encouraged Blackman. “We’ve some fantastic speakers in all of the conferences and we’ve been very careful to bring in people that are neutral about what and how they are presenting and ensuring that what they discuss is relevant and informative.”

Want more stories like this? Subscribe to our newsletter and get it delivered right to your inbox.

Conferences this year will be hosted both in and outside of the RAI, with the nearby (seven-minute walk, by our watch) Hotel Okura, playing host and providing an extension to the RAI. A shuttle bus is available for those who require it (or those who are feeling lazy).

Space, as often debated when discussing ISE, has been in short supply as a result of the show’s growth in recent years, forcing the organization’s hand in making a move to a larger venue: the Gran Via in Barcelona in 2021.

However, the RAI has grown since the 2018 edition, with Hall 5 being extended, increasing its capacity by 30 percent. Blackman noted in a previous interview how ISE has been forced to turn down new exhibitors because of a lack of space and occasionally inform current exhibitors that room was no longer available due to other exhibitors taking up the option of increasing the size of their own stands.

However, the expansion of Hall 5, which will be a temporary fix for 2019 and a permanent one for 2020, has ensured all those on the waiting list will be present at the show.

“One of the well-documented issues is that we have been running out of space, but we have found ways to actually extend the building,” explained Blackman. “We have some new exhibitors for 2019 and you’ll really see a lot of new things from them. The extension of the building [Hall 5] has given us the additional space we needed for now, which has helped us manage the waiting list, so we have added another 50 to 60 exhibitors in there. This satisfies our customers and adds an even wider choice for those in attendance, so it’s a win-win.”

He continued, “Another thing we’ve done to make the ISE experience more comfortable is including the Okura Hotel, which has allowed us to extend the conference program. We have been getting increasing demand from our exhibitors to bring more vertical markets to the show, so we’ve created some additional conference facilities over at the Okura. Every day we’ll be running half-day conferences there, two of which will be making their debut at the show: the Digital Cinema Summit and the Hospitality Technology Next Generation.

The growth will continue as exhibitor numbers are expected to rise in 2020, while visitor numbers tip closer to 90,000.

“You will see a slightly bigger show in 2020,” added Blackman. “Where we have our concerns is the ever-growing audience. We’re an industry that’s reaching out into so many sectors now. We’re touching every mode of working, every mode of life and living, and more and more people are interested and wondering, How will this affect me? Will this affect me? How can I prepare for it? How can I take my business forward

Blackman and his team have been working hard to encourage people to stay for the duration of the show rather than just a few days. He notes that the show is at its busiest on the opening Tuesday and Wednesday, with Thursday and Friday typically quieter as many people head home.

This tendency is due to many of the headline aspects of the show, such as main keynotes, conferences, training, and launches being crammed in at the beginning. This year, however, the show is taking a staggered approach, with events taking place all week. There will be a closing keynote on Friday afternoon to encourage a longer stay.

The change, he says, will make for a far more pleasant and informative experience for many.

“When we first started out, we put all the really exciting things at the beginning,” said Blackman. “What often happens is manufacturers show a lot of new things at the beginning of the show, and everyone wants to be there when the new ideas are being presented. That means that the show is very crowded on those first few days. But we’ve learned to spread the events out and help to expand the experience. What we are saying is that it’s all going to still be there on the Thursday and Friday, and you’re going to get a lot more attention from the exhibitors and much more time from them on those days because they will be able to dedicate more time. On top of that, we’re doing a lot more on the show’s later days. The reality is, ISE is so big that you need more than four days to get around and see all the different things you want to see, but this will help.”

Blackman revealed that ISE is exploring opportunities to help improve the experience (and safety) of getting around the RAI, which can be confusing for visitors.

This year, improvements have been made to the official ISE app in helping people find where they need to go, while some areas have been made one-way to avoid bottlenecking and subsequent overcrowding.

“We hope the app helps people get around much more efficiently. However, I do recommend that everybody take a floor map around with them. We have the show guides and a floor plan and the app. It can be difficult to navigate ISE without those, and they will help make the journey more efficient. For the next two years, we’re trying to do as much as we can to ease the issues and make the experience more enjoyable.”

More Than Just a Show

While offering knowledge, insight, training, and the like are all key to making ISE a destination for the industry, Blackman insists its appeal extends far beyond the walls of the RAI.

“Above all, we want you to enjoy the show,” said Blackman. “There are a lot of social activities going on. ISE is not just an exhibition—it’s an event. There are a lot of things happening all around the show. The show floor is the conferences, the seminars, the training and education. It’s the parties, the meetings and the networking on and off-site all around Amsterdam and the show. Come and join the party. We look forward to seeing you.”