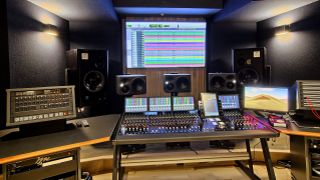 For over 90 years, the Interlochen Center for the Arts has provided students from third grade through high school from around the world with a unique artistic education. Nestled on 1,200 pastoral acres in scenic northern Michigan, the campus has now introduced a cutting-edge, $24-million Music Center to serve as the focal point for its substantively enhanced music programs. A key component of the new complex is a state-of-the-art recording/teaching studio complex developed by Walters-Storyk Design Group (WSDG).

Planning for the new facility began in 1990, when Sasaki Associates submitted an ambitious set of designs. Successful donor outreach provided the requisite $24 million to fully fund the project. Interlochen’s Music Division previously utilized various buildings across Interlochen Center for the Arts’ 1,200 acres. The new Music Center now links Corson Auditorium with the Edward P. and Jessie Frohlich Piano and Percussion Building and brings together programs in classical, contemporary, and jazz under one roof, along with a new program in music production and engineering.

WSDG partners/project managers, Romina Larregina and Matthew Ballos, report that two world-class WSDG recording studios are linked to virtually every creative room in the complex and to the stage of the Corson Auditorium. Observation balconies enable guests to watch ensembles perform; a double-layered “floating” roof system was deployed to minimize rain noise. A highly sophisticated systems integration program was custom-designed by long-time WSDG associate Judy Elliot-Brown of Rocket Science. The program facilitates live recording from all of the Music Center’s production, rehearsal, and performance spaces, each of which features floating floors and room-within-room construction to assure the required sound isolation between all production and performance zones.

Both control rooms are equipped with Dante user-interface and network management programs as key systems integration elements. The ground-level studio features a 250-square-foot control room bookended by two dedicated iso booths.  Adjacent to the left of the control room is a 900-square-foot ensemble room for orchestras. An 800-square-foot singer/songwriter room is situated on the right side of the control room, which also features windows into both spaces. A second (300-square-foot) control room built on the second level is outfitted with 7.1 surround sound Neumann speakers and is also fully linked to all performance spaces to facilitate simultaneous live recording and/or mixing sessions.

“We chose WSDG because of their proven track record in control room design,” said Rory Baker, executive director of Interlochen Presents. “They are trusted by many professionals in the industry and are highly recommended. In addition, WSDG designed the studios and control rooms at Interlochen Public Radio, and we felt that familiarity and consistency would be an advantage.”

“It is always gratifying to be invited back to contribute new ideas to a previous client,” said WSDG founding partner, John Storyk. “Interlochen Center for the Arts’ ongoing commitment to education has earned an exemplary reputation. We are pleased to have had the opportunity to bring our studio design, acoustics, and systems integration expertise to meaningful projects of this nature. The Interlochen team was knowledgeable, resourceful, and a pleasure to collaborate with, and we are confident that their graduates will acquire invaluable skills as foundations to their careers.”