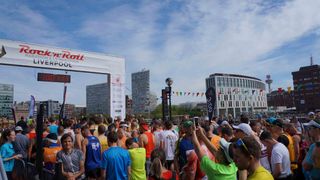 The 2018 Rock ‘n’ Roll Marathon and Half Marathon recently drew more than 22,000 participants to Liverpool’s streets, where runners and spectators alike were entertained by a wealth of stages located throughout the city. For regional live event specialist IE Production Services, the sheer size of the event was reflected in the number of stages it served – no fewer than 17, each of which presented its own challenges in terms of sound reinforcement. Having considered the options, IE Production Services looked to K-array and the Italian innovator’s exclusive UK representative, 2B Heard, for a broad range of solutions.

Encompassing the 26.2 mile course with options to either tackle the full marathon, attempt a half marathon, or try a slightly more manageable 5k, the Rock ‘n’ Roll Marathon draws on Liverpool’s unique musical heritage and has become an institution within the city. Stages are located at numerous points along the route, including the starting line, the town hall balcony (replicating the famous 1964 balcony concert by The Beatles), and the picturesque Sefton Park bandstand.

“With so many stages and performance formats, this was anything but a straight forward project,” said Mark McComish, project manager at IE Production Services. “It’s a very high-profile event with a lot of media coverage, so it’s important to the city. From our perspective it was vital that the speakers we used delivered high quality audio but were also very easy and quick to rig. K-array was the perfect choice on both counts.”

K-array solutions could be heard from the beginning of the event to the end. Included was the compact but powerful Firenze KH7 digitally steered line array, four elements of which covered the starting line, split between two stacks positioned 80m apart with low end support from two KS8 subwoofers.

“The KH7 is discreet, lightweight and very quick to rig but it’s still powerful enough to throw long distances, up to 100m, without feeling too loud for those nearest the stage, all of which meant it was ideal for the starting line,” said McComish.

Further along the course, the historic town hall balcony was served by a Mugello KH2 compact line arrays comprising four KH2 per side. Chosen for its ability to deliver “seamless coverage and a long throw down the strip of oncoming athletes outside the Town Hall, while still remaining unobtrusive”, the KH2 set-up was augmented with two Mugello KS5 dual 21” subs.

Elsewhere, a variety of smaller stages benefitted from seamless coverage courtesy of Pinnacle KR802 and KR202 column array systems as well as Axle KRX802 ground stacked line arrays. “The column arrays gave us even and consistent coverage while the IP rated options meant we were prepared for all types of weather,” McComish said.

“The Rock ‘n’ Roll Marathon is an exciting event for everyone who takes part, including ourselves,” he said. “It’s important to our company and a powerful reference project for us so living up to everyone’s high expectations was of paramount importance to us. With the support we received from 2B Heard and the breadth of the K-array range, we were able to design discreet yet powerful, high quality sound reinforcement solutions for all of the stages. No matter the challenge, we had it covered with K-array.”