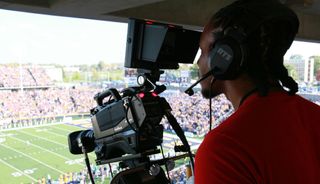 At the University of Toledo in Ohio, the Department of Communication provides students with practical, hands-on video production learning experiences while creating live in-venue programming and ESPN3 streaming broadcasts for the school’s Athletics department. The department relies on HDTV cameras from Hitachi Kokusai Electric America, Ltd. (Hitachi Kokusai) to provide high-quality image acquisition for its productions, most recently adding four Z-HD6000 studio and field cameras for the university’s football stadium.

The University of Toledo is a student-centered, public metropolitan research university with over 23,000 students. The school’s Toledo Rockets compete across 15 NCAA Division I sports in the Mid-American Conference.

The football stadium, known as the Glass Bowl, previously used very old standard-definition cameras from multiple manufacturers that required an unsustainable amount of maintenance. When it came time to replace them and upgrade to HD, the department’s satisfaction with the existing Hitachi Z-HD5000 cameras on its mobile production truck led it to again turn to Hitachi Kokusai.

“I like the Hitachi cameras because they’re reliable, they make great images, and they’re very competitively priced,” said John Eidemiller, executive producer, ESPN3 and athletic video productions at the University of Toledo. “In my experience, to buy a camera in the same class from another major manufacturer costs a lot more money.”

Supplied by systems integrator Duncan Video, the Z-HD6000 cameras provide video for in-house productions that are shown on the stadium’s 40-foot-wide video board and TVs throughout the venue. Three of the cameras are stationed on tripods, while the fourth is operated handheld on the sidelines. All four are connected via fiber to CU-HD500 camera control units in the control room over cable runs of more than 1,000 feet each, with MultiDyne SMPTE-HUT transceivers converting between SMPTE fiber and Tactical fiber for transport over the stadium’s existing single-mode fiber infrastructure.

Between football seasons, the stadium’s handheld Z-HD6000 is also used as a fifth camera on the department’s mobile production truck, complementing four Hitachi Z-HD5000s permanently assigned to the vehicle. The truck’s cameras are used in varying fixed-position and handheld combinations depending on the particular sport or event being covered, which include soccer, basketball, volleyball, baseball, softball, swimming, and non-athletic activities such as concerts and commencements. Meanwhile, three earlier Hitachi SK-HD1000 cameras are used for classroom education in the department’s instructional TV studio.

Eidemiller highlighted the image quality produced by the Hitachi cameras as exceptional. “I really like the way the Hitachi cameras look right out of the box,” he explained. “The color, saturation, and contrast all look great. That superb quality really stands out when we produce ESPN3 broadcasts in our basketball arena, where cameras from a different manufacturer are used for the video board. Iso feeds from our Hitachi cameras are seen side-by-side in the control room with shots from the other vendor’s cameras. It takes a lot of adjustments on the other cameras to get them to look nearly as good as the Hitachi units, and the other cameras still don’t quite get there.

“The cameras are primarily used by students who have extremely varying levels of competency and experience. The Hitachi cameras handle abuse very well, and have withstood some pretty severe conditions in the field. Even the decade-old SK-HD1000s we use in our classroom studio are still going as good as the day we bought them.”

Eidemiller also touted the valuable educational benefits that the cameras have enabled. “The Hitachi cameras let us expose students to broadcast-quality equipment at a cost that we can afford as a university,” he said. “As a department, our focus is not only getting students successfully through the program, but getting them out with jobs. It’s experiential learning that gets students to that point, and the Hitachi cameras help us do that. Our students are able to say they’ve shot eight different types of sports in live productions, with equipment that’s comparable or better than what they will be using in their first jobs.”

Last but not least, Eidemiller praised the customer service the university has received. “There are a lot of good products out there, but Hitachi Kokusai has been awesome in terms of taking care of us and going above and beyond,” he explained. “We love the Hitachi cameras, we’ve had great experience with them over the years, and we love the support we get from the company.”