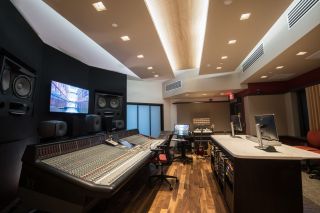 The Central Campus of Montgomery County Community College (MCCC) is located in Blue Bell, Penn., not far from Philadelphia and a short drive from the sites of the city’s own rich history of music production. When MCCC wanted to add another control room to the three studios that constitute the MCCC’s Sound Recording & Music Technology Program (SRT), they hired studio architect John Storyk of Walters-Storyk Design Group (WSDG) for the design and construction and to fit it with an enviable combination of digital and analog equipment, including an SSL 9000 console and Studer 24-track and Ampex two-track decks. They also stayed consistent for the new room by specifying speakers from Genelec—the same brand that outfits all of their other three studios. The facility, which came on line in April, has five Genelec 8351 Smart Active Monitors—part of Genelec’s “The Ones” line—configured for a 5.1 surround monitoring design, as well as a Genelec 7370A 12-inch powered subwoofer.

“This is the ultimate mix room, so it had to have Genelecs,” said David Ivory, director of the SRT Program and himself a Grammy-nominated alumnus of Philadelphia’s Sigma Sound. “The other three studios each have Genelec 8050A Active Studio Monitors, so we’re still an all-Genelec facility, and everyone likes it that way.” That includes the students and instructors of the SRT, as well as the steady stream of visiting engineers from Sigma Sound and elsewhere who come to the MCCC to use the studio and share their expertise and experience.

The room’s surround capability will be useful for the MCCC’s broadcast studio, whose 35-by-40-foot dimensions also allow it to be used as a tracking space. “I’ve been using Genelecs forever,” he said, citing the 8351’s dual woofers and wide sweet spot. “I didn’t even have to hear the 8351s before we bought them. We just knew they’d be perfect for surround. I just think that Genelec makes the most accurate speaker in the world to listen to and to trust. Other speakers you have to get used to; Genelecs are spot-on from the first moment you turn them on. We’ve had a lot of great engineers in here, and they all say the same thing: Genelec is it.”