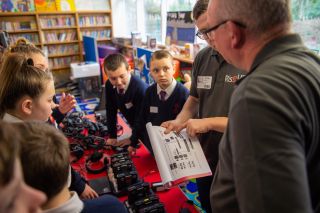 Producing a television show in one day is fairly routine, but when the technical teams are made up of 10- and 11-year-old schoolchildren whose only prior TV experience is deciding what to watch, it gets a bit more challenging.

That’s what the Rise organization— an advocacy group promoting gender diversity, education, and awareness of STEM topics—recently experienced when they hosted the latest in an ongoing series of unique TV production workshops, but the results were more rewarding than any ratings win or commercial success.

The organization's Rise Up series of workshops are designed to give students hands-on experience with broadcast technologies while working alongside industry professionals; Rise worked with Clear-Com and broadcast industry sponsors BT Sport and ITV on its most recent events.

Each workshop follows a similar format: produce a quiz show-style program in one day, using middle-school students as the technical and creative staff. For John Sparrow, EMEA senior systems consultant at Clear-Com, the March workshop was his second experience supporting the Rise Up program with a communications system provided by Clear-Com, and he found the process both fascinating and gratifying.

“The students were silent at the beginning of the day, filing in orderly and taking their seats,” he said. “Then, a buzz of chatter and excitement led to utter chaos that evolved into real teamwork. They all got through it and by the end of the day their shared sense of achievement was amazing to see.”

The day began with an introduction to the basics of television production, presented by Rise Up team leader Andy Beale of BT Sport who covered TV video and audio transmission including pixels and color, show direction, camera operations, graphics, audio, lighting, visual effects, and communications. Next, the students were divided into groups led by a volunteer from the industry and they were told to find the equipment and cable it together.

The morning session was dedicated to building a studio and setting up the quiz show’s production workflow. After a lunch break, the teams focused on rehearsals, script revisions, commercial breaks and every other element of a TV production, with the students rotating so everyone would have a turn at learning a new role.

“It's quite intense, but also a lot of fun,” Sparrow said. “We take them through the whole process step by step. It’s less about actually producing TV content and more about helping the students learn, giving them confidence, providing a hands-on experience with engineering, and exposing them to a potential career path they might not have otherwise considered.”

Rise plans to continue the workshop series at schools throughout the U.K., and then expand the program to other countries. New groups of industry professionals will be continually trained as team leaders, furthering the original Rise goal of mentoring and fostering relationships between industry professionals and students that can last throughout a career or lifetime—with the mentees one day becoming mentors to others.

In addition to Clear-Com, BT Sport and ITV, other companies providing their technology and expertise for the Rise Up workshops include Sky, Telegenic OB, dB Broadcast, Timeline TV, and Blackmagic, as well as many freelance volunteers.