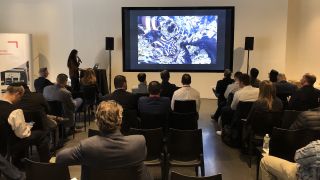 After introductory remarks by Barco’s business development manager for entertainment and advertising, Mary Perrella, and VP of enterprise sales Hans Dekeyser, the seminar kicked off with a presentation on artistic applications of digital signage in public spaces. Yaling Chen, deputy director and leader of the digital art team for MTA Arts & Design, shared the work her team had done throughout the MTA New York City Subway system, particularly in Fulton Center, a major transit hub and retail complex in Lower Manhattan.

Fulton Center, which Chen said is "the first fully digitally integrated public space and the largest digital media network to date in the MTA system,” features an array of visual implements, including numerous displays and LED walls. Though primarily used to display advertisements, for two minutes out of every hour, they switch to an art presentation. Chen showed short clips and provided background on the visual productions that play in the center, with a new one being selected each year.

After a short break, Margot Douaihy, AV Technology’s editor at large, moderated a panel discussion on visual media in museums, with the focus on the “King Tut: Treasures of the Golden Pharaoh” exhibit currently on display at the California Science Center. Mitch Stein, Barco’s national sales manager for Canada, and Khalil Williams, general manager of Design Electronics—the integrator for the exhibition—discussed the challenges in creating the audiovisual accompaniment for the largest King Tut exhibition that has ever toured.

Williams and Stein discussed some choices they made along the way, such as the need for a large, immersive 4K projection presentation at the entryway; the decision to use borderless projection screens throughout the exhibit, allowing for media enrichment that didn’t get in the way of the artefacts; and the challenge of handling the transition between the exhibit’s two different levels in the museum. Williams likened the value of high-end AV to the exhibition to the impetus for going to the movies: it had to be bigger and better than anything you could experience at home. Still, he felt that the exhibit’s draw was in the “tactile” experience of seeing the artefacts in person—something that will maintain its merit even as technologies such as virtual reality allow for people to digitally uncover the tomb from their living rooms.

To cap off the seminar, Anne Marie Stephen of Retail Innovation Lounge shared her outlook on the ways technology is transforming the retail experience. Though online retail continues to grow—including voice shopping through devices like Alexa, which requires no screens at all—Stephen believes there are many ways that AV can bolster the way physical shopping takes place.

Stephen discussed the combination of AI and digital signage in storefront locations that can change content in real time to target the demographics of the person standing in front of it, and the simple but effective digital customer engagement offered by companies like PERCH—which uses displays and content integrated with merchandise and has boosted sales of products from companies like Johnson & Johnson by as much as 62 percent. Stephen also touched on the potential of virtual reality to transform retail with examples of deployments by Macy’s and Amazon. But, the most important aspect of retail’s digitization, Stephen opined, is in its generation of customer measurement data, allowing for more targeted sales and data-driven decision making.

The takeaway from the seminar: although technology is increasingly making leaving home unnecessary, it’s also creating more compelling reasons to go out into the world.