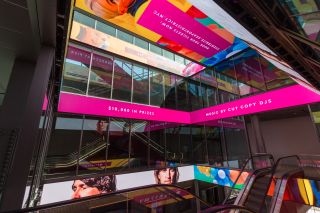 ANC has installed and is managing a new digital media network at The Howard Hughes Corporation’s new Pier 17 at the Seaport District in Lower Manhattan. Driven by ANC’s LiveSync operating system, the digital media network includes more than 2,000 square feet of 4mm outdoor LED integrated throughout the complex.

“The Howard Hughes Corporation has worked closely with ANC to leverage the Seaport District’s rich history as New York’s original port of innovation,” said Saul Scherl, president of the New York Tri-State Region, The Howard Hughes Corporation. “The use of cutting-edge technology is transforming Pier 17 into a state-of-the-art, dynamic environment, complete with engaging amenities and multi-media entertainment options for all our visitors.”

A four-story building designed by SHoP Architects, Pier 17 is poised to become an iconic New York City destination, with a 1.5-acre rooftop that will serve as a year-round community amenity—featuring a restaurant, outdoor bars, and a venue for concerts, cultural and public events. Home to ESPN’s recently launched new live broadcast studios, Pier 17 will also include waterfront restaurants from culinary powerhouses such as Andrew Carmellini, David Chang of the Momofuku Group, and Jean-Georges Vongerichten.

The building’s two-story atrium space, which is one of the main arteries to the rooftop terrace, consists of an LED ceiling and three levels featuring ribbon displays. These displays are customized to fit the various heights and slants of each atrium level’s façade, creating a new type of experience as consumers are engaged with eye-catching visuals as they move from floor to floor.

The unique column displays feature four flat sides which come seamlessly together at the corners without a gap, enabling content to transition from one column face to another without interruption. By using four individual flat faces, content creators can also clearly feature distinct pieces of content on each face before driving them as one canvas.

“Providing a customized product solution to Pier 17 has enabled ANC and The Howard Hughes Corporation to deploy the newest technologies into the building’s design,” said Jerry Cifarelli, vice chairman and founder, ANC. “ANC’s immersive technology and ongoing services are designed to further the Seaport District’s transformation into a retail, dining, and entertainment destination unlike any other in New York City.”

Operated by ANC’s LiveSync operating system, all of the displays will be able to feature individual content or synchronize together to act as one canvas across the different locations.