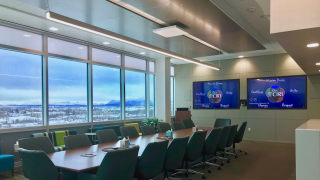 Headquartered in the eight-story Fireweed Business Center in Midtown Anchorage, AK, Cook Inlet Region, Inc. (CIRI) hosts a regular stream of clients and guests, both in its top-floor executive boardroom as well as in the first-floor conference center. So, when the corporation decided to upgrade the existing microphone systems in both spaces this year, Anchorage-based systems integrator Sound Decisions, LLC went with its first choice in keeping with the building’s innovative design: A virtually invisible ceiling microphone: Sennheiser TeamConnect Ceiling microphone with automatic beamforming technology.

“The advantage of the Sennheiser TeamConnect Ceiling over other ceiling microphones is that doesn’t just have beamforming focus; it has automatic beamforming focus,” said Jeremy Pennington, managing partner at Sound Decisions. “The TeamConnect Ceiling microphone actually tracks you around the room, so the people in the boardroom are not locked into a table configuration.”

Optimizing speech intelligibility with 29 individual omnidirectional microphone capsules, the TeamConnect Ceiling uses Sennheiser’s beamforming technology to automatically focus on the voice of the speaker in a meeting, regardless of positioning. Compatible with existing audio and video conferencing systems, the TeamConnect Ceiling automatically adapts to any room layout without reconfiguration and can cover an area of up to 650 square feet, with the option to add on additional units for larger spaces.

One of 12 Alaska-based regional corporations established in the Alaska Native Claims Settlement Act in 1971 to benefit Alaska Natives, CIRI is owned by more than 8,000 Alaska Native shareholders and has interests across the state, the U.S. and abroad. CIRI continuously ranks in the top 49 Alaska-based companies with the highest gross revenues in the state, according to Alaska Business Monthly, reporting revenue of over $513 million in 2018. With a host of employees in the lower 48 states visiting CIRI’s headquarters on a regular basis, in addition to the corporation’s clients and subsidiaries, the boardroom and conference center see a lot of regular use.

Already acquainted with CIRI through their mutual business network, Pennington and Sound Decisions owner Scott Wick knew they would need the most reliable automatic beamforming technology available for the top-tier boardroom in a Class A office space. “They’re talking to companies and businesses worldwide, and they use the executive boardroom almost all day, every day,” Pennington said. “We chose Sennheiser microphones because their reputation precedes them.”

Pennington put all his chips on Sennheiser TeamConnect Ceiling for CIRI’s executive boardroom, giving its executive team a week to demo the unit after the installation was completed—guaranteeing that if they weren’t happy after a week, he would pull it out. “The feedback was instantaneous—they were blown away by it,” he said. “The experience was exactly what they were looking for.”

CIRI was so pleased with the TeamConnect Ceiling microphone Sound Decisions installed in the boardroom this past February that they called the integrator back in March to install more TeamConnect Ceiling mics in the conference center, on the ground floor of Fireweed Business Center. Whereas the boardroom required only one unit, which Sound Decisions hung from the ceiling using the wire suspension kit provided by Sennheiser, the conference center required three separate units located strategically throughout the room and suspended a foot down from the ceiling. “They use the three units in a one-room/two-room configuration,” Pennington said. “So they can split the room almost in a third, and then the other two thirds use the other two mics together.”

“Even at a long distance, the Team Connect Ceiling picks up the voice no matter whether the speaker is loud or talking softly,” Pennington added. “It just seems to do a good job of finding the voice, tracking it, and picking it back up. And the TeamConnect Ceiling microphones integrate seamlessly into the space, and it looks really nice.”