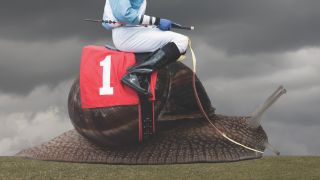 There are never enough hours in the day, and if you’re a tech manager, there never seems to be enough bandwidth. With video streaming now established as a primary communication vehicle, it’s a problem that doesn’t seem to be going away any time soon. Coupled with this is the frustrating fact that even when bandwidth is relatively abundant, it’s rarely consistent. When it’s lacking, tech managers are forced to make some careful decisions—and a few compromises.

There are a number of ways that tech managers can address the challenge of providing high-quality video in low-bandwidth environments, and reducing the bitrates of live video streams is one workaround. However, according to Mark Horchler—marketing director for products and solutions at Haivision, an enterprise video and video streaming technology developer headquartered in Montreal, Quebec, Canada—one can only reduce bitrates so far before picture quality is affected. He said that the application of HEVC over H.264 can decrease bitrates up to 50 percent while maintaining image quality, “but there are still issues, because bandwidth is not a constant—it can fluctuate up and down.” One department may be streaming a live video, and if another department decides to do the same simultaneously, suddenly there is less bandwidth available.

Recently, Haivision released its SRT (Secure Reliable Transport) protocol, designed to deliver high-quality video over public internet at low latency. The protocol utilizes ARQ (Automatic Repeat reQuest) for error correction and packet loss recovery, Horchler explained. “If a packet is not received correctly on the receiving end, the SRT protocol will ask for the packet to be retransmitted immediately, [preventing] lost packets and blotchy images,” he said. “Even over a fairly low bitrate or fluctuating bandwidth, tech managers are able to ensure that the video gets delivered at an acceptable quality and that there are no dropped frames, or blackouts, or cut connections.” SRT is open-source, and a growing list of vendors are implementing SRT into their solutions, including Microsoft.

Haivision’s Makito Series of 4K UHD and HD video encoders incorporate SRT, as well as Network Adaptive Encoding technology, which, as its name suggests, adapts video streams according to bandwidth availability. “We have taken HEVC and what we’ve done with SRT to analyze, in real time, what the available bandwidth is at a given time,” Horchler explained. “[It] will tell the encoder to lower the bitrate for a couple seconds, and then when the bandwidth increases again, it will go back to a higher bit rate.”

Horchler argues that one of SRT’s main strengths is that it addresses scale. “As companies grow, as they open up new offices, and as they acquire other companies, they need to be able to send their streams all over the world, in many cases,” he said. Delivering high-quality video streaming across campus is one thing; distributing it across a far-flung organization increases the tech manager’s challenge exponentially. “This is where SRT really shines as a protocol for streaming live video, whether you’re going over the internet to a remote location, or [through] a cloud-based platform like Microsoft Azure, or even a mobile phone network.”

Bill Cherne, VP of customer success and support at Sonic Foundry, the Madison, WI-based developer of the Mediasite video platform, explains this his company’s solution is capable of streaming in environments where the bandwidth is as low as 200kb per second. “In the grand scheme of things that’s low quality, but when you combine it with the way we do content viewing and bandwidth savings there, it gives the end user a good experience [for corporate town hall meetings and CEO addresses],” he said. The platform incorporates Adaptive Bitrate (ABR), which will increase the quality of the stream. “You encode [the video] at a super-high quality, but the user is going to vary between different qualities based on the moment that they’re watching [the stream] and [how much] bandwidth is available.”

As tech managers are well aware, enterprise video streaming doesn’t always happen in the actual enterprise itself. Corporate events such as annual sales meetings often take place in hotel ballrooms; products are launched during high-profile trade shows. Chances are, the powers that be want these events to be streamed—and bandwidth is at a premium in many of these venues.

Aaron Booker, CEO and founder of Varvid, a custom livestreaming services provider headquartered in Seattle, WA, is accustomed to the challenge of delivering high-quality video streams for live events. His method: ask for more bandwidth, and bank on getting less. “We always ask for 10Mb, and the reality is, any time you’re dealing with the internet, the maximum you should really expect is 80 percent,” he said. This translates to 8Mb, but that could decrease to 5 or 6Mb because the connection is rarely dedicated to streaming, and streaming only. “There may be a photographer who needs to upload photos, and people are sending email. You need to monitor that stream so you’re watching that stream through that same connection, and that creates traffic.”

Booker observed that while 5G may improve video streaming capabilities, he doesn’t believe it’s a silver bullet in the world of live events. “The problem with 5G is 5G is all about urban,” he said. “It’s going to be super-localized. It’s going to help, but it’s not going to solve problems for guys like us.”

While tech managers are under pressure to deliver the highest-quality video possible (read: Game of Thronesquality), the reality is enterprise budgets don’t always allow for this. In these scenarios, Cherne urges tech managers to promote simpler solutions—such as convening groups of viewers into conference rooms and meeting spaces to watch one stream on a large display—to save on bandwidth. “Suddenly, that takes 50 or 100 users off the network [because they’re all] watching one stream,” he said. “Sometimes those simple solutions are the most elegant ones, and they get you around a technical hurdle.”

Proud of the Cloud

While some organizations remain wary of moving tasks to the cloud, Bill Cherne, VP of customer success and support at Sonic Foundry, advises tech managers not to rule out cloud-based video streaming solutions. “Typically for the price, you can get a lot more capacity out of cloud service like ours than you could build in-house,” he said, adding that Mediasite’s cloud infrastructure offers multiple redundancy, is tied to a global CDN, and is cached throughout the world. “To build that in-house and to replicate that in-house is a big project. We can do it, but it’s expensive and you’ve got to test it and re-test it. If you’re only doing four events a year, there are a lot of network and infrastructure changes that can happen between those four quarters. [You need to test the system regularly] so you can ensure it’s going to perform when you really need it. The cloud has a lot to offer here.”