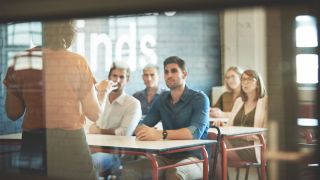 It’s one thing to deploy sophisticated AV technology that promises to streamline an organization’s processes and allow it to rise to the top of its category—it’s quite another to get people to use it. All too often, companies integrate new systems that are never leveraged, largely because no one asked the real end users about their actual needs, (which the new AV investment doesn’t meet). In other cases, the training that end users require in order to be able to operate the new tech wasn’t adequate, or didn’t exist at all. If a tech manager is to get an acceptable ROI out of a new deployment, user adoption is necessary.

One factor that hinders adoption is an issue that AV integrators have been struggling with throughout their history: they’re often brought into construction projects late in the game. Kay Sargent, senior principal and director of workplace at HOK, a global architecture, design, and engineering firm headquartered in St. Louis, said that this compromises how the systems will be able to perform. “Today, when our clients are asking us for seamless integration, that really means that [AV] needs to be brought in early on in the process, and it needs to be well thought out,” she said. “As designers, we have often seen where our clients want something, and you get down the line and the AV people come in and they can’t provide the right solution because of the configuration of the room or the confines of the space.” For example, ceiling heights may be too low to accommodate adequate sight lines and sound reinforcement, or the dimensions of the space may prohibit the correct equipment configuration. “We really believe strongly that AV is something that needs to be brought in very early, not only so it can be seamless, but so the design of the spaces is appropriate from the beginning so that the AV can be more successful.”

It’s also necessary to conduct a thorough examination of what kinds of gatherings specific spaces are destined to accommodate, Sargent noted—and this goes far beyond deciding how many people a room will hold. “So many meeting rooms are designed simply for PowerPoint presentations, [and] they’re not really designed for equal input, or ideation, or posting things up, or encouraging people to get up and move around,” she said. Not all meeting rooms should look alike, she said, explaining that while some may be better off with a traditional, formal design featuring a conference table, others might work better if they were furnished with couches, or even an array standing-height tables. “You need to truly understand: what is the gathering type that is happening? That will then determine the configuration of the room, and that also then determines the configuration of the AV and what you need.”

Establishing the desired business outcome of the AV deployment also plays a role in adoption, noted Rob Gilfillan, president of Cenero LLC, an AV/IT/UC systems design and integration firm headquartered in Malvern, PA. “There are so many things that we have in the workplace that just function and we know what the intrinsic value of it is because it just exists, like a phone, or a copier, or a printer,” he said. “But video and UC are very different; it’s definitely not an ‘if you build it, they will come’ type of thing.” The larger focus should not be on what these systems do, but why this investment is being made. “You’ve really got to flesh out what the real outcome is—what the goals and objectives are and what’s measurable—to make sure that when you finish the deployment, there are actually some measurable KPIs that tell you yes, this has been successful, or no, it hasn’t. The fact that it’s got a green light—that it’s got pulse and power—doesn’t mean that it was a successful deployment and it’s adding value to the business.”

Dr. S. Ann Earon, founding chairperson of IMCCA and president of TRI Inc., a technology consulting firm based in Waretown, NJ, urges tech managers to exchange with their users to learn about where and how they work. “It’s a combination of: Are they happy with the environment in which they work? Are they frustrated with communications not necessarily just internally, but with partners, suppliers, and customers?” These conversations will direct the design of a more people-focused workplace, she said. “You can ask things like: ‘What needs to be improved with the way you communicate? What annoys you about your work environment? Of the technologies we’ve already deployed for you, which do you use and like? Which don’t you bother using, and why not?’”

Also at the user level, Sargent encourages tech managers to, as she puts it, assess the “digital fitness” of the people that will be utilizing the AV systems that are being deployed. “In a lot of cases, what we’re finding is that a lot of the technology that people want to put into solutions is more sophisticated than what is needed, or what the users are ready for,” she said. She likens this to a Jaguar: it’s a high-performance car with a number of fine-tuned feature sets, but she wouldn’t necessarily allow a 16-year-old to drive one. “Digital fitness can vary significantly in an organization, and there are a whole lot of tools that are out there that people are barely even using because they don’t understand how to use them. I think a part of it is understanding: what is the digital fitness of the users? And what is actually needed? Just because we can do stuff doesn’t necessarily mean people want to.”

Another roadblock to user adoption is when new technologies are deployed without adequate user-facing communication. “All of a sudden they get into an environment—let’s say it’s a video room—and things don’t work the same way,” Earon illustrated. “Well, that’s because IT has upgraded things, but they haven’t communicated the upgrade to the users.” This scenario combines two problems: inadequate information-gathering prior to the deployment, and communication during and afterward. “And they can’t do it once—they can’t say, ‘We sent out one notice and everybody should have read it,’ because it doesn’t work that way.”

Earon believes that when tech managers invest the time in understanding their users and how they work, the user/tech relationship will evolve into something much more productive. “They will be looked at as the people that solve issues for [users],” she said. “Then when they want to introduce a new technology, they have a group of champions they can go to: ‘This is what you told me you wanted us to do. Here’s how we’re going to do it—will you trial it for me?’” In most cases, she said, the answer will be affirmative, “and that’s how they then work out the bugs in whatever may have been deployed.”

For Sargent, the ideal way to drive AV adoption is to bring architects, designers, IT executives, and AV professionals together from the outset, giving everyone the opportunity to deliver systems that users will take advantage of. “The digital and physical worlds are running on parallel paths right now, but they’re about to collide,” she said. “Right now, there are not a lot of venues where IT, AV, and architects all come together—architects tend to go off to their meetings, designers go to their furniture shows, and AV people go to theirs. What we need to do is really start bringing them all together to come up with smarter solutions.”

Avoid AV as an Afterthought

Gilfillan noted that while AV and conferencing is much less an afterthought than it was in the past, not all organizations understand the value of upfront preparation pre-deployment in the interest of driving adoption.

“Companies that have never gone through the growing pains—that have never done this and failed at it—end up going down a path where they don’t spend a lot of time on it and they don’t understand the importance of it,” he said. “Companies that have gone through this—and that have seen what can happen if they don’t spend enough time on it in terms of thinking about how the systems correlate to each other, and service and process protocol, and escalations, and the importance of data in an enterprise and how people are using it—they know it’s worth spending time on it, and they understand how important it is to flesh out the business objectives.”