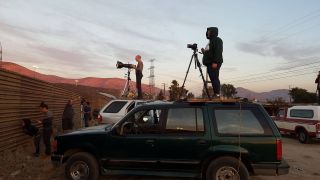 As an artist during the 1990s, Bill Moyer was already interested in politics, social movements, and activism. “During the Bush administration, I got to a place where I was like, ‘Oh my God, it feels so indulgent to be doing this art when the world is falling apart.’ I threw it all away and I dove into being my activist self,” Moyer explained.

Today, he is co-founder and executive director of the Vashon, WA-based Backbone Campaign that he launched with friends from an artist affinity group in 2003. “As artists and designers, those skills around composition and communication transfer perfectly into activism, and they're a great lesson,” he said. The organization’s mission: Backbone Campaign amplifies the aspirations of "We the People" with creative strategies and artful activism to manifest a world where life, community, nature, and our obligations to future generations are honored as sacred.

During its first several years, Backbone was innovating protest messaging using large puppets and giant banners. That was until Simon Clark from Stage Works Productions, located in the same warehouse spaces as Backbone, “opened up a whole new world to us with light projection,” said Moyer. “He is a fantastic guy, a great artist, and really generous with his craft—he set us up on how to do projection.”

Backbone leveraged another artist from the warehouse with an Omax waterjet machine that cuts messages into stainless steel disks that are placed in front of the light projectors. The disks are called gobos which means “goes before optics.”

The group has the ability to recalibrate, if necessary, depending on the social movement. “For instance, if an offshore drilling comes up we are able to print a bunch of gobos,” explained Moyer. “Then we can stick them in priority mail and get them everywhere from Tallahassee Florida, to Bellingham Washington to New York, D.C., up and down the coast, Atlanta, Chicago.”

Backbone does not use expensive video gear or large digital projectors. “There is a place for that,” explained Moyer. “The price, the fragility of the gear, and the replicability of the tactic is such that is not well suited to grassroots, non-violent, gorilla activism.”

With a lean budget and teams called “solidarity brigades” working in 20 cities throughout the United States, Backbone Campaign needs equipment to be affordable and the set up simple. Each team is equipped with one or two Source 4, 750-watt ellipsoidal spotlights and several gobos. “We use a zoom, then we have two lenses that we can shift in order to create a wider or narrower beam depending upon what our target is,” said Moyer. “If the target is further away, we have a narrow beam to get there and not be too big and washed out.” For most projections, the team uses a Source 4 has a zoom lens that goes from 15 to 30 degrees. Using two 12-volt deep cell batteries wired in parallel gives them 15 to 20 minutes of projection time.

During Trump’s inauguration in January 2017, Backbone rented a 2,000-watt generator and using two spotlights, Moyer said, “We started shining one message after another and shining that up onto Trump's inaugural ball.”

Shining Light on the Law

Moyer has been detained by the Secret Service but never arrested for projecting messages onto a building. “There is no such thing as trespassing with light,” he said. Commercial speech can be regulated if the message was an advertisement Moyer explained, “But they can't regulate, or they're not supposed to regulate protected first amendment speech.” As long as the projectionists are on public property or sidewalk, and not damaging anything no laws are being broken. Moyer said, “You can project onto anything that's nearing that sidewalk, even if it's a private structure. The exception to that, it gets a little more difficult when you're talking about national monuments.” Projecting on the U.S. Supreme Court was a little tougher. “On the second anniversary of Occupy Wall Street, we projected ‘Rights Are for People’ up onto the face of the U.S. Supreme Court,” said Moyer.

When some think of grassroots protesters the image of disorganized, disparate groups sometimes come to mind. The antithesis of disorganized Backbone’s work is grounded in grand strategy. “My strategy mentor is a former Pentagon analyst and a protégé of a Colonel John R. Boyd.” It is part of a grand tactical idea called Motherhood in Mismatch Strategy conceived by Boyd. “It's the idea you want your cause to be the moral equivalence of motherhood and you want to avoid the following mismatches: A mismatch between what you say you are and what you actually are. What you say you're doing and what you're actually doing, and what you say is real in the world and what people experience the reality.”

Moyer continued, “If your cause becomes something that's easily attackable because you're destroying things that people care about, or your ahead of your audience in some way, then you lose people. This all relates to other concepts like domains of conflict and whether you're in moral conflict or in a maneuver conflict, or attrition warfare. We are principally operating in moral conflict. That means that our power is relative to our capacity to draw in many people, and the hearts and minds.”

For the past three years, Backbone has run workshops to help others learn how to use light projection as an easy and fun way to raise visibility of an issue.

“People have fun,” said Moyer. “There is a lot of value in being able to mobilize this sort of thing.”

Possibly one of the most valuable lessons is, “when you're going into an action, a lot of times your audience is not the audience who is on the street, your audience is on social media.” The strategy is in the long tail message. "We want this particular shot on the front page of the paper, and we want it to say this so that nobody else can reinterpret or misinterpret what we mean to do or communicate," concluded Moyer.

Cindy Davis is the contributing editor of AV Technology magazine. Do you have a tech-inspired social engagement case study to share? Tweet us at @AVTechnologyMag.