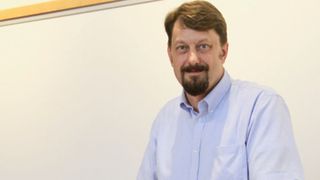 AV Technology: How is AV/IT convergence playing out in your facility?

John Drummond: Since classroom support has been part of IT for longer than the decade I’ve been here, it’s a natural fit for us; not only because of the wide base of talent on the Academic Technology team, but also owing to the solid relationships we have with other stakeholders inside and outside of IT.

AV Technology: What AV/IT problems have you solved recently?

John Drummond: We recently completed two large capital projects. One academic building was completely gutted and rebuilt (Tyler Hall), and a new science building was constructed (Integrated Science Center building 3). Our major challenge was to try and align the architectural and AV plans given to us with the technology needs of our teaching and research faculty.

AV Technology: Does the IoT (Internet of Things) have any influence in your organization and or facility?

John Drummond: Most of the IoT strategy I hear about comes from the networking and security groups; e.g., maintaining enough wireless connectivity when an entire lecture hall of students comes in the room with two or three endpoint devices on them, and making sure these types of devices don’t impact teaching, learning, and business practices.

AV Technology: What AV/IT do you hope to buy in the near future? Why?

John Drummond: We are trying to homogenize our install base to keep our support cost down and also make it easier on the end user. Using our new classrooms as a target standard – a large increase in dual-projection rooms, and using touch panels instead of button panels, for instance – we are slowly getting there.

AV Technology: How do you procure/purchase your AV for in-house installs?

John Drummond: Like a lot of things in higher education, it depends. We often use an integrator for large jobs (like the aforementioned capital projects). We might buy from a distributor for small jobs, such as installing interactive tablet displays in classrooms where they’re desired.

AV Technology: Where are technology manufacturers getting it wrong or missing opportunities?

John Drummond: I see a lot of attempted crossover into the Higher Education space from the K-12 space, in facile ways that suggest to me that there is an assumption that, pedagogically, both spaces are equivalent. In my experience, they are not. Faculty adoption of new teaching techniques and/or new technology to support teaching has to be driven by their goals—at least on my campus.

John Drummond: Probably the biggest obstacle to collaboration is time; the time it takes to build relationships so that collaborating stakeholders understand each others’ goals, missions, needs, and the like.

There’s a big difference between partnering with someone (whether an individual or a team/department) to achieve a goal and, say, just closing a ticket someone submitted. The latter helps maintain a good reputation as a service organization, but the former can pay future dividends. Whenever possible, it’s best to take the time to form a collaborative relationship so that both parties see each other as partners working, ultimately, towards the mission and goals of the university.