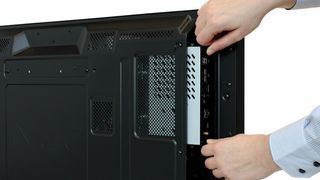 Think that projectors and flat panel screens at school have to continue to be dumb displays? Think again, because those displays with the Open Pluggable Specification (OPS) slot can take a variety of processing boards, transforming and enhancing the screen’s abilities at a marginal cost. In a very real sense the OPS card slot is a way to future-proof your school’s displays so that they (and you) can adapt to new specs and uses.

When OPS was first suggested by Intel, NEC and Microsoft in 2010, flat screen displays and projectors were not upgradable. OPS changed that with the ability to change what they are capable of and allowing them to adapt to new uses. For instance, few thought about the possibility of running digital video over a network in 2010, but today you can get a $280 HD BaseT OPS card that can open new video horizons for a display built six or seven years ago.

The key to its success is that the OPS spec is simple and flexible, but can be adapted to perform a variety of roles. Modular and self-contained, OPS cards measure 7.1- by 4.7-inches and 1.2-inches thick, and fit into a slot inside the projector or display.

Each board is easy to install and one size fits all. Just slide the board into the receptacle, allow it to snap in place. The key is that the board’s JAE TX25 plug fits into the TX24 receptacle for positive contact of the module’s 80 connector pins.

This wiring plan not only allows up to 19-volts to be carried to power the board’s AV gear. The range of OPS boards runs the gamut from HDMI and Displayport to audio and USB 3.0. Regardless of whether it’s a broadcast quality board for a 65-inch display or HD-SDI ports for a projector, pop it in and the ports should work.

The boards have been designed to survive 500 insertions, so you don’t have to treat the OPS boards as fragile devices. In fact, lots of schools move the boards around the campus and use them where and when they’re needed.

There are fan-less OPS designs that are limited to using less than 25-watts, but also higher-performance devices available that have their own cooling fans. Plus, because they are remotely manageable, these OPS boards can be set up to power-down when not in use and can be updated and maintained from a central location – not an insignificant consideration if your school has dozens of OPS display boards in use.

It’s also a way to bring the cost of displays down at a college by repurposing older displays. For instance, you can turn an older 48-inch HD screen used for signage into a self-contained large-screen computer for a library or study center. All you need is the right OPS board.

At the moment, NEC sells 16 displays and 5 large-venue projectors that can take advantage of OPS add-ons. At the low-end is a $249 Android powered board that uses a quad-core processor and eight graphics engines for streaming networked video to a digital signage screen 24X7.

Need more processing power? There’s also a $1,550 PC on a board that has up to a Core i7 processor, 4GB of RAM and 128GB of solid state storage. It’s capable of UHD playback.

In other words, regardless of whether it’s new or several years old, if your display can take an OPS card, it can be transformed into a state of the art device. This is often at a fraction of the cost of replacing the display or projector, making OPS one of the best bargains around.