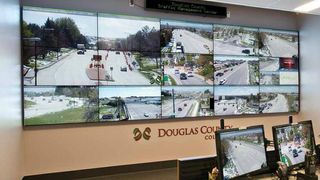 If a control room is to act as the central hub of an organization, logic dictates that it should be able to process the necessary information to keep that entity up and running as efficiently as possible. As the ways in which we receive and transit information have multiplied, this adds another layer of complexity to the tech manager’s job. What all do we need to consider when we’re designing a new control facility, or upgrading what we’re already working with? In short: a lot.

HOW MANY FEEDS DO YOU NEED?

“One of the big things that’s really different about control rooms today is the number of places that the material is going simultaneously,” said Dave Van Hoy, president of Advanced Systems Group LLC, an AV design and integration firm based in Emeryville, Calif., which works in a number of different markets, including corporate video and broadcast. In days of yore, Van Hoy said, a control room might have had a single video signal feeding a projector, and maybe a stream. “Today, you’re going to have what you’re putting up on the screens in the room, and there might be many screens in the room that [receive different images].” There are streaming, recording, and video conferencing feeds, the latter of which need to be bidirectional. “And all of these things require people, and the ergonomics of how they’re going to do their jobs, and then how they’re going to communicate with each other in this hectic, chaotic sometimes, environment.”

WHAT ARE YOU DOING AND WHO’S DOING IT?

This means that tech managers must pose some key questions: what, exactly, are you going to be doing in this space? Who are you delivering content to, and how? Will you be recording what’s taking place? Is audio and video conferencing one of the use cases? Will all of this material eventually be available, in archived format, on demand? And—a factor that Van Hoy noted often doesn’t receive enough attention—how are you going to staff this space? “Because a lot of people have visions of what they want to do but don’t understand the number of people necessary to do it, or the skills necessary to do it,” he said. “And those two things begin to define the requirements.” If the space is intended for occasional use by people who aren’t terribly tech savvy, the room design should accommodate this. Conversely, if the facility will be used by highly trained technologists, this, the design will probably incorporate more sophisticated functionality.

DO YOU NEED KVM? (ANSWER: YES)

Tim Carrigan, manager of technical services at RGB Spectrum, the Alameda, California-based developer of Zio, a networked AV platform, as well as the MultiPoint control room management solutions, argues that KVM (keyboard, video, and mouse) functionality is a must in control rooms, so that operators may access all of their systems via one workstation. He also points out that it’s necessary to determine not only what needs to be monitored from the control room, but also what happens when incidents occur. “They [will be] listening for alarms when events occur, and [will they be] audio, video, or both?” he illustrated. And, he adds, will alarms be handled manually, or with automated responses?

The BADA Digital Arts Facility at San Lorenzo High School was designed by Advanced Systems Group for professional productions, and includes a control room anchored by a Snell Kahuna Flare 2 M/E production switcher. An element that seems obvious but often gets ignored in control facilities, Van Hoy noted, is acoustics. If the control room incorporates audio monitoring, it’s necessary to ensure that sound doesn’t leave the room, nor does exterior sound bleed into the room. Within the actual space, good acoustics are critical so that people can hear exactly what’s going on. “A lot of times these rooms are designed by architects who are not acousticians, [and] who are not used to being around [these] spaces, and [acoustics] are often missed,” he said.

One significant challenge tech managers are facing in control room spaces that apply video over IP has to do with HDCP (High Bandwidth Digital Content Protection): just because you have HDCP-compliant devices doesn’t necessarily mean you won’t have issues distributing protected content. “Not only does everything have to be compliant, but then [the devices] all have to be compatible [so that they can] work together,” Carrigan said. “And certain types of devices can’t be downstreamed from other types of devices. Whether it’s an HDCP repeater, whether it’s a sync, whether it’s a source, whether it’s a through device, all of these different devices, when you start putting them together in a stream or signal flow, that could break the compatibility, even though everything is compliant.” He noted that RGB’s Zio was designed to address this issue. “You still have to play within certain rule sets, but at least we’re able to offer a rule set that you can play in.”

Ergonomics, as Van Hoy mentioned, is a big deal, because it has an impact on how comfortable people are working in and moving around a control room—and therefore, how efficient they are. “You need to have a layout of the work space that makes the equipment as easy to operate as possible,” Van Hoy said. He noted that consideration should be made for “itinerant” people, such as executives (or, in the case of a broadcast control room, executive handlers), who you didn’t think would ever have reason to be in the space, but who will inevitably make an appearance. Displays need to be at the right height and distances in relation to the workstations, “so that people are not having to crane their necks or turn their heads to do their jobs.”

In an effort to maximize space and avoid the cost of building new walls, NetApp’s studio control room was redesigned by Advanced Systems Group to resemble the traditional layout of a broadcast production truck. Where there are people and AV equipment in confined spaces, there is also heat, which is one of the reasons Van Hoy emphasized the need to store rack-mounted gear in a separate space. “There is almost no reasonable way to build a control room where you have racks of equipment in the room with the humans, where you can limit the noise that the equipment is making and control the environment in a way that makes the equipment and the humans happy,” he said. “Because if the equipment is cold enough, the people are going to freeze; make the people comfortable, and the equipment is going to burn up.” He said that if everything and everybody is in the same space, it’s a failed design, and adds that it’s important to allocate enough air conditioning to keep things cool.

Smart power control is another element of modern control room design. As Alan Tschirner, VP/GM of LynTec, stated, "As studio lighting transitions away from traditional incandescent to intelligent LED fixtures, dimmer boards or panels are no longer included in the design. The fixture’s onboard processing controls the intensity and color output of the light. In the absence of dimmers, there is no way to effectively or efficiently turn power off and on to these fixtures without utilizing remote power control."

With remote power control panels, users are able to extend the life of their intelligent lighting system, reduce operating costs, and have a system that enables a “reboot” of any fixture that has lost its place. On the audio side of the house, remote power control ensures that equipment is powered in a proper and repeatable sequence. It’s important that each component in the audio system have the required boot time or it won’t perform correctly. This is becoming an essential consideration as devices move to the network and need to boot up in a specific sequence to complete the communication handshake to operate with other devices on the network. Many of the available sequencing systems on the market don’t provide the breadth of flexibility to boot up each component in the system separately before the next equipment comes online. Tschirner added that power control also provides "protection from under voltage events that can damage expensive systems."

Broadcast control spaces of the past were staffed with shaders––those individuals charged with monitoring cameras to ensure things like camera positions, exposure, and color were correct. Dave Van Hoy, president, Advanced Systems Group LLC, noted that this job now falls onto the shoulders of the robotic camera operator. “In many venues it’s more than one person, because it’s pretty hard for one person to aim and focus more than one camera at a time, even with robotics,” he said. “This is a super-important position within the control room, and it’s relatively new in control room design. And in the most sophisticated spaces it’s almost always dedicated positions.”

Carolyn Heinze is a regular contributor to AV Technology magazine.