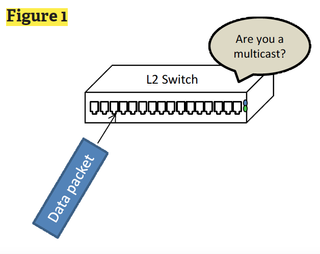 Most of us have learned that when you deploy devices in a multicast network configuration, there is a feature that you are encouraged to turn on with each of the switches. It’s called IGMP Snooping. IGMP is the Internet Group Messaging Protocol, the underlying technology of multicasting. I once had a client who had failed to turn on Snooping and said, rather proudly, “It didn’t make a difference. Everyone still saw their videos.” He was really wrong about how the network was working.

This situation can create very high volumes of unnecessary traffic. IGMP Snooping breaks the rule for conventional switch operations and has the switch “snoop” into the IP address to determine if the packet is an IP broadcast. This procedure makes it possible to avoid broadcasting the video packets. When we studied my client’s network more closely, we discovered that he had about four times the traffic level that was necessary for proper operation on the IPTV network.

Phil Hippensteel, PhD, teaches at Penn State Harrisburg. He is a regular contributor to AV Technology and Sound & Video Contractor.