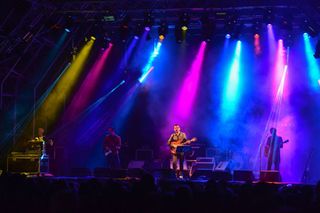 dbn’s project manager, Nick Buckley, oversaw the operation to light the main stage, which was headlined by I Am Kloot, Richard Hawley and Sinead O’Connor and enjoyed by 6,500 people across the weekend. dbn also provided lighting and effects kit for two smaller stages.

The Main Stage lighting design was based on last year’s successful format and the need to accommodate multiple genres of music and performance as well as presenting a set up that was straightforward, flexible and versatile enough for any visiting LDs to work with.

The stage was slightly different this year – a 16 meter wide dome shaped structure was supplied by Acorns - from which dbn sub-hung three LX trusses and a drapes / backdrop truss upstage, which also gave a backstage working area behind.

All the moving lights were Clay Paky, and included 12 x Alpha Spot 575 HPEs, eight in the air and four on the floor; eight Sharpies on 1 meter drop arms off the mid and upstage truss to add depth … and 16 x Sharpy Washes, all even distributed across the overhead trusses.

Buckley comments that he finds these ideal ‘all round’ fixtures that can provide a tight ‘classical Sharpy’ beam at one end of the scale, and then open up wide giving a comprehensive stage wash with a great selection of colors.

In addition to these, the lighting was completed with eight Atomic strobes plus Molefeys for audience illumination. There were also a few Moles positioned on the floor, although generally the floor was kept clear of lights to help facilitate speedy changeovers.

The console was an Avolites Pearl Expert running the latest Titan software, and this was operated by Nick Buckley for the majority of the event.