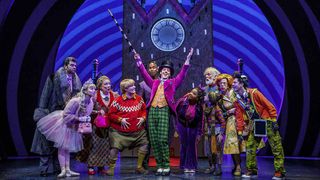 Having delighted generations of young readers and moviegoers, Roald Dahl’s Charlie and the Chocolate Factory

opened on Broadway at the Lunt-Fontanne Theatre with a new take on the classic children’s tale for theater audiences of all ages. WorldStage is providing extensive video support for the new musical with a custom-fabricated Unilumin LED wall, a wide variety of Panasonic projectors, d3 Technologies’ media servers, and a BlackTrax real-time movement tracking system.

Video displays supplied by WorldStage are key elements throughout the show. An LED wall in act one helps tell the story of the Golden Ticket winners, while extensive projection mapping onto moving set pieces is a fixture of acts one and two. In addition, the BlackTrax movement tracking system is the behind-the-curtain star during a very whimsical Oompa Loompa scene.

Projection designer Jeff Sugg, who has a 20-year history with WorldStage, called the show “a really successful marriage of scenery, automation technology, and video technology. Projection fills a very powerful role in serving the story; it’s not an added layer of window dressing.”

The LED wall in act one helps narrate the story of the children who win the coveted Golden Tickets to tour the Chocolate Factory. Illustrative graphics displayed on the LED show the global locations the winners call home and serve as backgrounds for each child’s showcase song.

“The original design called for a circular LED wall, but we were surprised to learn that a circular wall had to be custom made and that was not an option,” Sugg said. “WorldStage demoed LED products for us to find the most appropriate resolution and helped us determine which technology would be the most effective for constructing a circular array from square LED tiles.”

Scenic design company Proof Productions built a custom framing structure to house the LED tiles. “The wall is roughly 14.5 feet in diameter and is made up of 18-inch square modular tiles, each slightly rotated in a fragmented array to create what looks like a deconstructed flat circle,” said Lars Pedersen, World Stage account executive.

BlackTrax movement tracking is deployed for the segment in act two featuring the television-obsessed Golden Ticket winner, Mike Teavee. Initially, the production envisioned Mike and the puppeted Oompa Loompas manipulating a stage full of physical TV screens. “For the screens to be big enough to be seen in the back of the house they had to be at least 42 inches,” Sugg said. “But when you get a bunch of 42-inch flat screens, each with cables or battery packs plus the puppets, the technology quickly became a burden.”

Sugg devised the idea of substituting seven monitor-size foam-core placards with BlackTrax sensors for the bank of TVs. A d3 2x4pro media server in conjunction with the BlackTrax system would handle the tracking and position-awareness as the Oompa Loompas manipulated the placards. An edge-blended pair of Panasonic projectors projected imagery onto the surfaces of the mock screens as the actors moved them about.

“We put together a fully staged and choreographed number for the director, writer, and composer to get their approval,” Sugg said. “This was a great example of technology serving the art, and not vice versa. Once I knew we were going to use BlackTrax, then using d3, with its tight integration of BlackTrax, was a foregone conclusion.” As a bonus, BlackTrax also serves as a tool to quickly align and calibrate the projectors for all of the show’s video mapping.

In act two, the Chocolate Factory set—three walls and a ceiling with a quirky forced perspective—are projection mapped using the inherent feature set of the d3 2x4pro; a second 2x4pro is on hand to facilitate redundancy. “d3 takes all the data from more than 50 pieces of automated scenery and accurately and precisely tracks imagery onto the scenery,” Sugg said. “Each of the side walls is made up of five rotating smaller panels that we use as entrances and exits. With d3 we can effectively track the scenery individually or as a group. Everything works very smoothly. It’s a real triumph of all the components playing nicely together.”

Sugg credits WorldStage and production video engineer, Asher Robinson, with the foresight to set up a 10Gb network for optimal systems operation. “Having a 10-gig network for a show is not a given, by any stretch of the imagination,” he said. “But it’s manna from heaven for projection people. All the information from the animators to the servers and all the server communications are done over the 10-gig network, not a standard network. That’s the kind of thing WorldStage is on top of.”