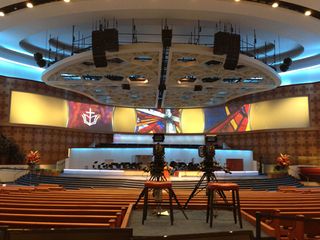 The new First Baptist Dallas campus is part of a revitalization campaign in downtown Dallas, which also features several multimillion-dollar museums, theaters and parks. While most churches are renovating older buildings and constructing satellite campuses in the suburbs to accommodate growth, First Baptist Dallas chose to expand its footprint in downtown Dallas in order to continue serving the core community. An updated audio, video and lighting system is at the heart of the $135 million construction project.

“Burst was chosen by First Baptist Dallas to integrate the sanctuary video production and projection systems. The systems contribute to the congregations’ experience of services via the large projection screen which provides HD video. Barco’s projectors beautifully produce every frame of video and have been completely reliable,” said Robin Heywood, President of Burst.

First Baptist Dallas needed an AV solution sizable enough for viewing by its 3,000 member congregation. The church outfitted the new sanctuary with a 142’ screen, fed by Barco’s HDF-W22 large venue projectors. Ten HD video cameras are placed throughout the Center to capture all the program elements for image magnification on the central screen in addition to original video and graphic content.

“We’ve worked with Barco projectors on numerous event stages, and value them for their brightness and contrast in ambient lighting situations, as well as their ease of integration,” said Seth Morth of Clair Brothers. “They give our customers a high-performance projector for less cost.”

“The projection sub-system presented many challenges in terms of logistics, engineering and installation. Barco delivered their products on time, met the budget, worked out of the box and continue to make each service a memorable event,” said Robin Heywood, President of Burst.

In addition to the projectors for the main Worship Center sanctuary, First Baptist Dallas installed an HDF-W22 projector at the adjacent event center as well as eleven RLM-W8 projectors for the Youth Center’s classrooms and meeting spaces.

"We are very excited to be partnering with Barco on this installation,” said Bryan Bailey, Director of Media and Production of First Baptist Dallas. “The consistency and quality of the projectors has really calmed many of our concerns about blending and warping seven images."