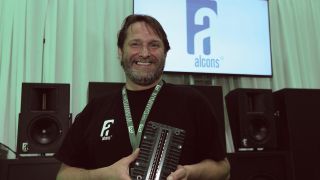 The Audio Demo Rooms are a show unto themselves at InfoComm, and every room has a different story. Here is the final installment of the InfoComm Daily’s three-part preview.

dB Technologies will be flying three stereo systems in Demo Room W224F, including Ingenia IG3Ts paired with SUB 18H, DVA Minis with their MS12 flyable 12-inch subs and the ViO L210 with S318 subs. dB will also be demoing the new ES 2103 portable PA, along with the LVX XM and DVX DM TH monitors. On show as well is the Moving D wireless system, which operates in the entire UHF Band from 470 to 790MHz.

Wavefront Precision is a financially accessible system that is highly upgradeable and flexible with “scalable resolution,” or the more boxes with dedicated amplifier channels, the higher the resolution and scale of coverage control achievable. As Martin Audio managing director Dom Harter puts it: “This means even at the lowest level of resolution, the results are still fundamentally better than traditional line arrays at no extra cost, and at the top end of resolution users can enjoy many of the benefits MLA systems provide.”

Bosch (Demo Room W221BC) rocks the nouveau products with the compact new EVC series addition to the Electro-Voice EV-Innovation family and the premiere flight of the new X12-125F flying subwoofer for the X-Line Advance line-array family. Also enjoy the sonic benefits of a new smart amplifier line with an eight-device GUI.

RCF's Roni NevoRCF (Demo Room W230A) targets live sound in the HOW market with its HDL6-A active, two-way line array. And check out the D-Line Series “speaker on a stick” active products that were recently upgraded with FiRPHASE DSP filtering for better linearity and output.

As usual the Danley Demo Room (W224G) offers cool jazz demos up through bone-shaking bass, but the biggest draw this year might be Mike Hedden talking about the Danley speaker configuration in the new Mercedes Benz Stadium, home of the Atlanta Falcons. In addition, Danley will be showing the new SM80LF loudspeaker—the power of an SM80 and two TH118’s in a single box and the new Jericho 6 horn, which features PHD (Paraline High Density) Technology.