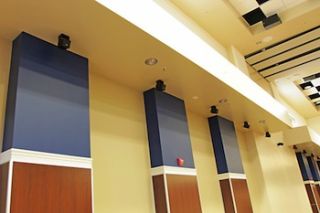 Students at Valley Christian Schools’ Conservatory of the Arts in San Jose, CA are honing their musical skills in a high-tech rehearsal and performance facility.

Completed in late 2011, the new Conservatory building incorporates a multipurpose rehearsal hall that can be used as one large room or divided into two smaller spaces. In any of the three space configurations, the acoustical characteristics can be optimized for music style and ensemble size using the permanently installed Meyer Sound Constellation acoustic system.

“The school wanted acoustics with exceptional variability,” said James Black of Acoustic Dimensions’ San Diego office and principal acoustical consultant for the Conservatory project. “The idea was to accommodate anything from a small string ensemble to a full marching band, either for rehearsals or for performances with temporary seating. We presented options for physical and electronic solutions, and in the end they determined that Constellation offered the degree of acoustical flexibility and quality they needed.”

In the open configuration, the room measures about 60 by 80 feet and can accommodate an audience of up to 250 for a medium-sized ensemble recital. Lowering dual Skyfold walls (forming a four-foot air space between) creates two acoustically isolated rehearsal spaces.

“We’ve had three performances so far: a junior high band concert, a choral concert, and a jazz concert,” said Troy Gunter, vice president/director of Conservatory of the Arts and director of the school’s wind ensemble. “The sound was wonderful, and both performers and audiences loved the entire evening. Constellation’s effect was so natural that nobody noticed anything about the acoustics.”

“So much of what you need to learn is listening and adjusting to other musicians,” Gunter said, “and Constellation is providing the optimal environment for doing that.”

Twenty-four suspended miniature cardioid microphones are deployed overhead for picking up ambient acoustical sound, and—in a Constellation first—all are retractable into the ceiling to protect them from hoisted flags and color-guard rifles during marching-band rehearsals.

Gunter cites the reaction when he first rehearsed with the wind ensemble in the new room: “I started with Constellation off, and when I turned it on I could see the students’ eyes just come alive. When we talked afterward, a trumpet player in the back row said, ‘I could never hear the flutes before, but now I can really hear them.’”