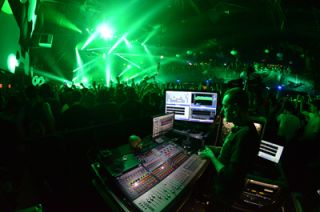 “When I first heard the LEO system at a demo in Nashville, I realized this would be a game changer for EDM,” says Brendan Hoffman, FOH engineer and production manager for the tour. “LEO is miles ahead for this style of music. It has given me the opportunity to bring a ‘hi-fi’ factor to Bassnectar shows that I don’t believe anybody in EDM has offered to this point.”

“Most of the energy and key points in the compositions are focused on deep bass,” said Hoffman. “It’s critical to get down to those notes cleanly and with enough energy to make them effective, and the 1100-LFCs do it every time. There’s a physical weight to it that you can feel in your body and through to your bones. With the 1100-LFCs, you get that full effect without it being screamingly loud.”

Hoffman also appreciates the sonic freedom afforded by the LEO: “The evenness and linearity are fantastic. I can achieve levels that I want without coloration, and without getting into a scenario where speaker components are being overdriven.”