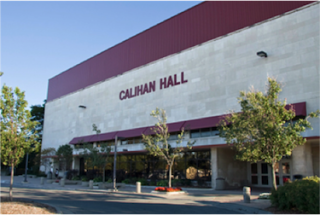 Calihan Hall at the University of Detroit

The University of Detroit Titan Basketball fans will have a lot more to look forward to for the coming 2016 basketball season. Due to the efforts of director of athletics, Robert C. Vowels Jr., changes have been made to the Dick Vitale Court housed in Calihan Hall. The 8295 seat Dick Vitale basketball court will now sport a new scoreboard and an ISP Technologies Reference 4210/4215 line array pro audio system.

"I talked to alums, fans, and coaches, and one of the biggest areas we needed to improve was fan experience and engagement," said Vowels. "With the new scoreboard and sound system, I feel very confident that there will be a dramatic increase in the atmosphere inside of Calihan Hall."

I.COMM, a local Farmington Hills integrator, choose the Michigan based manufacturer, ISP Technologies to deliver the sound quality demanded by the arena. The three hangs of the Reference 4210's and one hang of the Reference Line 4215's, were strategically placed around the new scoreboard. The design allows for all seats in the arena to be covered in an even pattern of sound. Each element of the system has a 1000-Watt RMS power. The system also includes a proprietary OVP-1 over-volt protection panel to help guard against overvoltage and other surges that may damage the system. ISP Technologies designed the OVP-1 after power surges in the US Naval Academy's basketball arena damaged the ISP Technologies system that had been installed there.

The University of Detroit Mercy is pleased with their new system as Vowels related, "I feel very confident that there will be a dramatic increase in the atmosphere inside of Calihan Hall. The in-game experience is the number 1 piece. Fans have to come in here and leave wanting to come back."