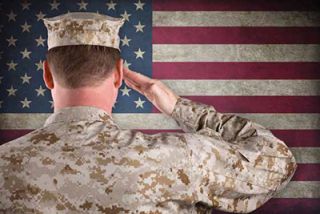 Emily King is on a mission. And it has very much to do with some numbers she recently posted on her blog.

According to the Bureau of Labor Statistics, as of January, overall unemployment in the U.S. was at 7.9 percent; unemployment among veterans was at 7.8. “Not too shabby,” she wrote. Until she examined the stats a little further.

Among 18- to 24-year-olds, overall unemployment reached 16.6 percent, with the rate almost doubling for veterans of the same age: 31.3. Women veterans in this category face an unemployment rate of 55.7.

It’s no secret in the military community that those transitioning out of the service and into the civilian workforce at any age face incredible challenges finding jobs. The tough economy aside, ex-military members are forced to battle against stereotypes (they’re too rigid), the task of translating the skills they acquired while on active duty into civilian-speak so that hiring managers can actually comprehend what they are capable of (otherwise known as “civilianizing” one’s resume), the stress of being cut off from the friendships they developed with those who still remain in the service, in many cases relocation, and, oftentimes, disability. But to people like King, what remains hidden to many civilian employers is the pool of qualified talent that they could draw from, if only they factored veterans into their recruiting mix.

King is the author of Field Tested: Recruiting, Managing and Retaining Veterans (AMACOM), and vice president of military transitions at The Buller Group, a recruiting services and consulting firm headquartered in Reston, VA. She argues that one of the most common myths about veterans is that they don’t know what to do unless someone is barking orders at them. “That couldn’t be further from the truth,” she said, “but what they do need is clear parameters, and I would argue that every employee needs clear parameters.”

Many veterans are a good match for small- to mid-sized businesses, King noted, because in the military, they are often required to wear a number of different hats, even if they were only in the service for a few years. She added that one of the frustrations she hears from vets who take jobs with larger corporations is that they often get locked into one role—and it’s usually similar to what they most recently did in the military. “For a small business, there is the opportunity to leverage the full skill set of the veteran, and let the veteran feel like they can contribute in all the ways that (they are capable of),” she said. In smaller businesses, it’s usually the case that everyone in the organization is given the opportunity to make a difference, even if they are not necessarily in leadership roles. “That is something that is very appealing to veterans.”

According to Bill Scott, vice president of marketing and communications at Bradley- Morris, a military-specific recruiting firm based in Kennesaw, GA, over 200,000 veterans transition into the civilian workforce on an annual basis—not to mention those who are already in the civilian workforce, but who are seeking to change careers. (Disclosure: Bradley-Morris publishes Civilian Job News, to which the author of this article regularly contributes.) Scott argues that the “service mentality” most vets possess—the idea of contributing to something larger than you— is consistent with what most companies want out of their employees. “Add to that the training you get in the military that imbues attributes like determination, goalsetting, and team orientation”, he said, as well as high-level technical training and the experience of having had to perform one’s job under less than ideal, often extremely dangerous conditions. “Military job seekers have leadership experience beyond their civilian peers of a similar age; they’ve been expected to get things done with a team of people and have had to figure out how to make it work.”

Because many veterans struggle with “civilianizing” their resumes, it is often difficult for hiring managers to ascertain how they fit into a civilian context. “If someone was a heavy equipment operator in the military, they could easily say, ‘I can come out and drive a bulldozer in the civilian world,’ but what they don’t understand is that they might actually qualify for much more than that,” said Kevin O’Brien, managing partner of Veteran Recruiting Services, a Philadelphia, PA-based service that hosts virtual career fairs focused on connecting employers with veterans. “It’s very easy, if you’re a business development guy in the civilian world, for example, and you go from this company to another company, that your duties are the same. The soldier who is very task-oriented may not have that same understanding.” Job candidates and hiring managers need to meet each other halfway, then, to ensure that they understand each other.

One of the challenges that veterans face early on during their transition into a civilian job is that corporate America, even if it may wear a suit, is a lot less structured than the military. Management styles often tend to be less hierarchical, and a civilian professional’s “rank” is not displayed on their sleeve, rendering it difficult for vets to figure out to whom, exactly, they must answer, and for what. Added to this is the fact that—let’s face it—not all civilian supervisors and managers have been trained specifically for their roles… instead, they grow into them. With all of this in mind, King emphasized that civilian managers must clearly articulate the company’s goals and the expectations they have for the veteran who is filling the position—those clear parameters that she was talking about.

Most importantly, managers and employees in general need to acknowledge that the onboarding process will be different for a transitioning vet than it is for someone who hails from the civilian world. “Everyone should recognize that there is going to be a learning curve for everyone—it’s not always going to be smooth,” she said. “Veterans are going to have a different bearing about them, a different way of interacting and communicating, and it’s going to take time for them to relax from that and learn what’s accepted and appreciated in their new environment.”