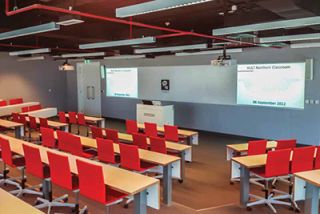 Online higher ed is slowly shedding its inferiority rap. In a recent Gallup and Lumina Foundation survey, 37% of respondents agreed or strongly agreed that online schools provide a high-quality education. That’s up from 30% in 2011.

The steady increase in online education’s popularity and perception is a double-edge sword for colleges and universities that are mostly or exclusively brick-and- mortar operations. For example, online-only schools’ lower overhead costs often mean they can price their tuition lower than traditional colleges. But when those traditional colleges are public, it’s tough for them to keep tuition low if they’re in states with flat or declining higher ed funding.

So it’s no surprise that many traditional colleges are increasingly going online, which enables them to tap a bigger pool of potential students but without the additional capital cost of more buildings. As perceptions about online quality increase, so does the addressable market.

“The big trend right now for most universities is they’re trying to expand their footprint because they’re trying to expand their student base,” said Rob Sheele, Vaddio president and CEO and a North Hennepin Community College board member. “That all comes down to revenue, simply because the amount of government support that a lot of state colleges get now versus what they got 10 years ago is shrinking.”

Hence the trend toward not just more lecture capture, but also higher quality productions. Faculty and students increasingly expect more than just, say, a single camera that spends the entire lecture locked onto the podium or the PowerPoint deck on the dropdown screen.

“It’s extremely advantageous to have a video production or film background,” said Robert Rasberry, Drexel University assistant director of facility services. “If an instructor says, ‘I want my lectures recorded in a studio background,’ my people can accommodate that. Those post-production editing skills are a big plus.”

Projectors evolve, but so do displays

Campuses won’t go the way of the slide rule anytime soon, and more lecture capture gear is just one of the ways they’re evolving technologically. Another example is changes in how projectors are used.

“We see continuing use of projection screens with a traditional projector, but with some new twists,” said Jim Hoodlebrink, Draper information display systems product manager. “There is better interactivity, with integration of touch pads and electronic participation.

“We also see write-on screens used with ultra-short-throw projectors. These may be used more as a whiteboard than as a projection screen. We still see traditional large screens because many of the rooms are large and need the larger image so everyone can see the information being presented.”

But in classrooms, exactly the opposite trends is playing out; some schools are replacing projectors with displays.

“I’m seeing the trend toward displays,” Rasberry said. “We put together a new collaboration space that’s based on groups rather than traditional classroom seating. Whereas we used to have smart projectors and short-throw projectors, we decided to go with the new smart displays because of the advances they’ve made in quality with the LEDs.

“You don’t have to change a bulb. In a lot of cases, it’s better able to handle the different resolutions thrown at it as opposed to some of the projectors we have. In larger classrooms and auditoriums, obviously projectors will have their foothold for many years to come.”

The learning environment in many classrooms and even auditoriums is evolving away from nonstop lectures and toward more give and take. That trend is driving purchases of collaboration technology.

A 130 square-foot video wall of a 14-panel (7x2) array of Planar Clarity Matrix LCD video wall displays create North Carolina State University’s Connections Wall in the Emerging Issues Commons of the James B. Hunt Jr. Library. The interactive platform invites visitors to engage in public policy through hands-on exploration. While displaying macro-level information on the top row, camera-based sensors in the Clarity Matrix displays recognize a visitor’s presence and present interactive touchpoints along the lower-row screens. “Collaborative learning has actually become a punch list item for most higher ed institutions,” said Gina Sansivero, director of educational sales at FSR, whose HuddleVu product is designed for small-group collaboration. “From breakout tables in larger classrooms and labs to huddle spaces in libraries and even student unions, the idea is that working together and sharing information enhances a student’s learning, problem solving, and communications skills while potentially enabling a more practical or real approach to theoretical concepts.”

Collaboration often includes student- and faculty-owned tablets, smartphones and laptops, as well as devices such as Apple TV, Google Glass and Chromecast. That creates challenges for AV/IT staff when it comes to ensuring that a room’s systems have, for example, the right physical interfaces. Faculty and student expectations about what’s possible and preferable in the classroom often are set by the experiences at home.

“Apple TVs and Chromecasts are easy to use at home, [and] users would like to be able to simply pop up the same devices in classrooms,” said Lee Bandman, Syracuse University wireless network architect and network engineer. “The ignorance factor is in having no idea what a terribly poor job the device makers do in building in any suitability for use on business-class networks.

“Most big network environments take one of two approaches. They either break their own rules and best practices to try to make the consumer-grade devices work in the classroom — and then live with all of the support fallout that comes with it. Or like us, they say no to creating more problems than get solved by trying to accommodate living-room quality, capability-limited devices on business networks.”

The bring-your-own-device (BYOD) trend—and all of the challenges it creates — isn’t limited to content sources, either.

“Simplified control, including control from BYOD devices, will be replacing traditional sophisticated control,” said Clint Hoffman, Kramer Electronics vice president of marketing. “Additionally, classroom systems require a scaler/switcher at their heart more than ever to effectively handle this BYOD trend.”

What’s next in higher ed?

BYOD highlights another challenge for higher ed tech managers: keeping their systems as future-proof as possible. One way is by choosing products whose features are determined more by software and firmware than hardware, as well as cloud-based solutions. For example, Mersive’s Solstice collaboration platform is designed to work with off-the-shelf computer and network hardware.

“Because Solstice is a software product, we are agile and able to adapt it quickly to evolving market requirements and new use cases through the continuous release of new and updated versions,” said Rob Balgley, Mersive CEO. “Because our competitors based their solutions on proprietary hardware, they are either in conflict with existing IT policies and/or duplicating hardware cost because the end user also already has computer and network technology in place. Solutions that are based on proprietary hardware always have higher upfront costs and increased TCO because they will have to be replaced as standards and requirements evolve.”

Lecture capture is an example of how products that are software-centric, use commodity hardware, or both, enable savings that enable wider deployments.

“We used to have four or five classrooms that had lecture capture,” Vaddio’s Sheele said about the college where he is a board member. “We now have 30. Had we stayed with an appliance-base system, we probably couldn’t have done it. Because we can now use software-based applications, the cost is almost insignificant.”

A professor uses Draper’s Scribe, an interactive whiteboard screen with a unique feature-set. In some cases, old technology is getting new life. For example, many dorms and classroom buildings got category cable as computers became common. Then Wi-Fi came along and idled a lot of that cable. Some vendors see category as an opportunity to create subnets to offload certain types of video so it’s not clogging up the main network.

“You might want to take that throwaway video, which might be news, sports, entertainment, and put that on a spare category cable,” said Dick Snyder, Z-Band vice president of marketing and sales. “Then you don’t have to encode and put that into your server, where you’ll need software and middleware to manage it.”

That reuse also could enable distance learning in dorms and Greek houses.

“Classrooms are very expensive,” Snyder said. “Kids can be in sorority or dorm rooms or common areas and be receiving live video.”

Reusing old infrastructure is one way to stretch the budget. Another trick is to look for products that can support disparate applications, possibly to the point that it creates opportunities to dip into non-AV funding, such as the security budgets that many schools fattened following tragedies including the Virginia Tech shootings. For example, Kramer’s latest scaler-switchers include emergency-alert features.

Whether it’s by finding new ways to reuse old infrastructure, getting creative with budgets or using new online technologies to serve more students, every penny makes a difference.

“If we can add 30 percent more students to a college and not overburden the college, the next result is we can reduce the cost of education to students by 30 percent,” Sheele said. “We’re going to need to start leveraging technology to be able to make education affordable. The more we can virtualize it, the greater the access.”

Collaboration Doesn’t Have to Be Confusing

In the business world, collaboration is as common as khakis. So by deploying collaboration products, colleges such as the University of Michigan’s Ross School of Business are preparing students for the real world while riding the higher ed trend toward teamwork.

Ross is using Mersive’s Solstice software, which lets students and faculty use their smartphone, tablet or computer to connect to, share and control a display simultaneously over an existing IP network. For example, students can share content wirelessly, which means AV and/or IT staff don’t have to worry about whether all of the right connectors are there for the myriad devices.

A collaboration solution isn’t much good if students and faculty struggle to figure out how to use it, or if the AV or IT department has to do a lot of hand-holding. Hence the importance of an interface that’s’ intuitive enough for everyone.

“Solstice was very carefully designed to allow for a broad continuum of user familiarity: from new user to experienced user, and from tech savvy to tech indifferent,” said Rob Balgley, Mersive CEO. “The current version allows a user to share and control content with as little as two button clicks. More advanced users will find they can incrementally explore additional functionality without ‘getting lost’ or ‘breaking’ the UI, which was designed to be rugged and intuitive.

“We used today’s point-and-shoot cameras as a design metaphor. You can use the camera in automatic mode or go into manual mode and tinker as desired.”