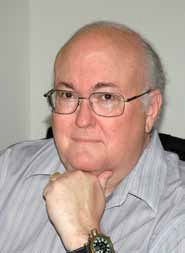 NAME: Alan Brawn
TITLE: Principal
COMPANY: Brawn Consulting
OVERTIME: Brawn has come to view IT as the umbrella that AV now exists under—a contentious idea he admits, yet, “it is accurate especially in the sense that we have become a connected world and go far beyond the confines of basic AV technologies in a boardroom or conference room.”

Disruptive—the buzzword has quickly become cringe-worthy to many tech enthusiasts. Yet perhaps no one, or no business, has used disruptive technology over a more prolonged period than Alan Brawn.

From the first affordable high-brightness CRT projectors through to the dawn of videoconferencing, Brawn has been at the forefront of the industry’s most transformative technologies. “It was the disruptive nature of what we produced that began my focus on teaching and training the industry to work outside of the box of what they were used to,” he said, specifically of his time at Hughes-JVC , early on in his career.

It was through a string of jobs working with these industry-altering technologies that Brawn Consulting eventually emerged.

“After decades of involvement with leading-edge technologies, and a deep commitment and involvement with education all along the way, borne out of the necessity to go beyond the spec sheets and limited information so pervasive in the industry, my industry colleagues, family, and friends convinced me, almost nine years ago, that there was a real need for a company dedicated to researching, designing, creating, and then offering and presenting educational programs and curriculums for the commercial AV industry outside of the confines of a specific manufacturers, or even the industry organizations,” Brawn said.

Alan and Jonathan Brawn taught a Digital Signage Experts Group (DSEG) certification course at the Digital Signage Expo in Las Vegas, February 2014. Brawn Consulting soon came to be a family affair, employing Alan’s son Jonathan, who had been working with his own home theater design build firm and later as a director of engineering for a “zero burn” display plasma display company. When the latter business dissolved, it made perfect sense for Jonathan to join his father. After all, he had started his career supporting the elder Brawn’s educational efforts at Hughes-JVC 20-years prior, where he helped create presentations. He had already begun providing full technical support and co-authoring training programs over the years.

From day one, Brawn Consulting has evolved along with the AV industry. During the early days of the manufacturer-direct-to-dealer model, the firm concentrated on creating programs for these entities individually. “The first big change came with a paradigm shift in the sales channel to the manufacturer to distributor to dealer model, and as a result, we now work the majority of the time with the large distributors [that] in turn, have us work with a much broader range of dealers,” Brawn said. “The last big change has been away from the traditional pro AV design build model as the focus of training and into the new world of digital signage, encompassing AV , IT , content creation, and more. In short, we have radically expanded our base and what services we provide.”

Brawn Consulting has also expanded to provide technical support and design services for resellers, distributors, and manufacturers—services that were never part of the original business plan, Brawn noted.

Three main changes in the industry drove Brawn to adapt his firm along these lines. The first was a shortcoming of supply and quality of impartial, agnostic, and vendor neutral training, which Brawn believes is “a prerequisite for an industry to be thought of as a profession.”

The AV /IT convergence was the next big factor in Brawn Consulting’s evolution. Brawn has come to view IT as the umbrella that AV now exists under—a contentious idea he admits, yet, “It is accurate especially in the sense that we have become a connected world and go far beyond the confines of basic AV technologies in a boardroom or conference room.”

The family firm has also made the addition of mobile distribution and content display to its expertise, along with analysis of that content and how it affects the viewer. “This expanded medium, sometimes called digital out of home or digital signage, is capable of enhancing an environment, as well as the experience, and, ultimately, can become a method of behavior modification,” he said, noting, “this was not where we thought we would be heading 10 years ago.”

The range of services Brawn Consulting offers today includes the creation of professional development courses for manufacturers targeting their specific sales/distribution channels, customized training for any company or distributor in AV , digital and static signage, as well as industry certifications for the Imaging Science Foundation (ISF) and the Digital Signage Experts Group. All of these are designed to be impartial, agnostic, and vendor neutral, in addition to not-for-profit.

The story of Brawn Consulting would not be complete without discussing the longstanding commitment to volunteering for the industry. Brawn has taught courses for InfoComm for more than 25 years, initially with its predecessor, ICIA . Promoting standards, like the Projected Image System Contrast Ratio (PI SCR ) AN SI Standard and the current DI SCU S display image size standard, has also been an initiative for Brawn.