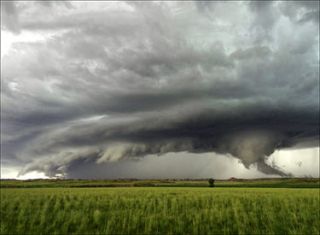 I started my annual pilgrimage to InfoComm stranded at Philadelphia airport as a series of storms hit the East Coast. I soon realized the real cause of my flight delay was not the storm itself, but climate change as a whole, making more delays an inevitable fact of life. Of course, it was not long before I drew parallels with the AV industry.

Here’s my theory: the fate of AV is already cast in stone, much like climate change. The industry is going to evolve. Accept what is going to happen, look for ways to mitigate the risks, and maximize the opportunities that change always creates. The storms of the AV industry are just the symptoms of the bigger picture. Storm survival is not a strategy for the future. Instead, you have to adapt and transform.

So, what sorts of AV storms were InfoComm storm chasers confronted with at Vegas?

Firstly, there was the “Consumerization Hurricane”: the inexorable demand to deliver AV applications and services on consumer platforms, to the point where it is difficult to justify a pro-AV solution versus a consumer one. Perhaps it is time we stopped trying to differentiate and instead focus on the right technology to get the job done reliably at a decent price. At InfoComm 2014, I saw more handheld consumer grade displays on expo booths than at any other time. Perhaps lessons are being learned.

What about the “Microsoft Typhoon”-- the highly lauded, big splash début for Microsoft at InfoComm? Many derided the Redmond behemoth because it did not present a flashy booth. I cannot speculate whether Microsoft will or will not come back to InfoComm next year, but one should never underestimate Microsoft. Their involvement in AV goes way beyond Lync (expect Xbox-One-derived technologies to feature heavily too). Microsoft will be one of the most significant shapers of the AV industry in the future; this is no squall.

Lastly, we have the “Virtualization and Cloud Cyclone.” It is inevitable that software in virtualized datacenters will begin to take over the tasks of hardware in equipment racks, and that many of these applications will be presented as subscription services in the cloud. While at InfoComm, I noticed that virtualized videoconferencing infrastructure from the orange suited PEXIP people was highly disruptive and enabled the switch from room-based conferencing to user-based services at lightning speed. And don’t think that Cisco and Polycom were asleep whilst the shutters were rattled by the winds; both demonstrated a deep understanding of where the market is heading and how to meet the user’s future needs. Videxio, a highly compelling cloud services provider born out of the famed Tandberg / Cisco research brain trust, delivered enterprise class video meetings as easily as making a cell phone call. And it’s not just the videoconferencing folks: Haivision’s cloud streaming service is attracting hundreds of new customers.

All of these storms are symptoms of climate change. Customers are no longer buying AV technologies without first truly understanding what the user is trying to achieve and defining what the user experience should be. This sounds so simple doesn’t it? But this is not how we as an industry have gone to market. The days where manufacturers build great products and recruit a reseller channel to shift them are over. Instead, it is the end-user customer and their “trusted advisor industry partners” who are driving the industry now.

Manufacturers need to listen to both customers and their partners and be prepared to adapt, change quickly, and abandon models, practices, and products that are no longer relevant. If not, then they may suffer the fate of many merchants before them; their flagships now wrecks, smashed on to the rocks by powerful storms that no one saw coming.

What evidence can I provide that supports this theory? Last Tuesday, I hosted a global customer roundtable for the Global Presence Alliance (the Star Alliance of the AV industry) and rather than talk about technology trends, we set about to define the key components that every AV experience should have and went on to design the AV meeting space of the future.

The results were fascinating and far-reaching. Of principle importance is that technology needs to be invisible, allowing the user to get their work done simply and easily. There has to be reliability, security, and consistent performance. And now, everything has to be connected to the network. AV has to adapt to the way that IT works, and if not, it won’t be deployed at all.

Believe it or not, the meeting space of the future most closely resembled my 17 year old son’s bedroom, with his Microsoft Xbox One, content in the cloud, gesture and speech interfaces, and amazing content delivered across lightning fast home Verizon FIOS network. Now heading to Drexel to study computer science and games design in the fall, perhaps he’s already got the AV of the future nailed?