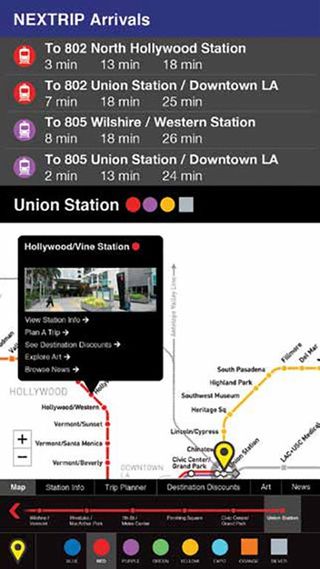 The Los Angeles County Metropolitan Transportation Authority purchased the iconic downtown LA station in 2011 and is working on a Master Plan to implement wide ranging improvements to the facility, with a primary focus on passenger service and satisfaction.

“Our goal for the tower was to provide customer-facing information that would help visitors navigate more easily throughout the station,” said Hornstock.

Concurrent with development of the new environmental graphics package, plans were being made to celebrate the 75th anniversary of the historic station’s opening day. With a large number of participants expected, along with focused media attention, this event was identified as the ideal time to roll out the new information tower. The problem: the tower wasn’t scheduled for completion this soon. Plus, the initial plan specified static LED screens. This occasion called for something more dynamic.

The project’s initial plan specified static LED screens. But this application called for something much more dynamic and engaging. THE SOLUTION

Metro’s IT Services had been investigating options for electronic digital signage since mid-2011, working closely with the Communications team on content development. A pilot featuring a ViewSonic EP5555 55-inch free-standing dual sided ePoster digital kiosk was receiving positive feedback, and the team had begun testing a touch-enabled ViewSonic EP5555T 55-inch free-standing ePoster digital kiosk, which was targeted to become an Interactive Station Guide for eventual use throughout Union Station and Metro’s 100 or so other locations.

KEY ELEMENTS / / FOR THE END USER

“Our goal for the tower was to provide customer-facing information that would help visitors navigate more easily throughout the station.”
—Jenna Hornstock