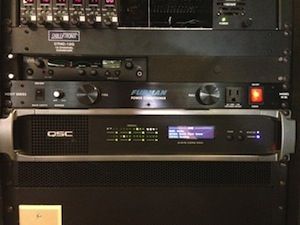 The South Point Hotel is a Casino and Spa in Las Vegas. It was the first mega-resort to be built south of McCarran Airport on the Las Vegas Strip.

The resort, which purchased the QSC Audio components through Solotech Las Vegas, intends to extend the Q-Sys network into a $30 million bowling arena planned for completion at the beginning of 2016. The property opened at the very end of 2006, and added QSC Audio BASIS networked audio products to the resort.

“When we expanded the arena we took the opportunity to upgrade the processing in there from BASIS to the new Q-Sys 500i," said South Point production manager, Jason Lein. "The system has so much processing power that all of the bowling arena expansion will be run off that same core as well. The bowling center will be built for broadcast TV and we'll have two new equestrian arenas as well. We'll run it all off that same system.”

South Point recently expanded a concourse and added meeting rooms to its Arena and Equestrian Center. It features a 4,600-seat show arena, an indoor practice arena, and a covered outside arena. The center also hosts motor sports and other events in addition to equestrian shows.

“We created four different concourse zones," Lein said. "We've got a bar, tunnels, a practice arena, and 1200 air-conditioned horse stalls; the new meeting rooms located on the concourse. We run approximately 144 different page configuration options, using both wired and wireless microphones for paging. Depending on what horse events are in here we have to set up several different page zoning scenarios on the fly.”

“Everything is QSC amp-based, even in the main arena,” said Lein. “We've got some PowerLight 4.0 amps from the original install that we never need to replace, and we're using the PL380s as well.”

“Whichever tech crew is assigned to an event will grab an iPad or the computer controller and set the paging configurations up prior to that show, based on that event’s needs," Lein said. "Switching from the BASIS to the Q-Sys system made it very easy for us to program these iPad-controllable UCIs (user control interfaces) to fit those needs, then reset the whole system before the next event, and then set up the next event, all off these UCIs. The Q-Sys system has been a big benefit for that alone.”

At the end of April, South Point, Las Vegas Events, and the Las Vegas Convention and Visitors Authority jointly announced a 12-year agreement with the United States Bowling Congress to host seven championship events in Las Vegas beginning in 2016. South Point, which already features a 64-lane Bowling Center, home to the Professional Bowlers Association's World Series of Bowling, will build a two-story complex housing a 60-lane bowling facility outfitted with the latest technology on the top floor and two additional horse arenas, sound isolated from the floor above, on the lower level.

“When we get into the new expansion, the two new arena bowls, we’ll install the new QSC AcousticDesign Series speakers,” said Lein. “We'll be installing over 100 of the five 1/4-inch AD-CI52ST ceiling speakers throughout the bowling center hallways. We'll also be installing AcousticDesign series speakers for the bowling lanes, with QSC subs placed throughout the bowling center. We'll probably be adding more Q-Sys I/O Frames later this year.”

The upgrade to the Q-Sys system’s advanced Layer 3 networking technology has made it easier for Lein to program the new set-up.

“Our new design with Q-Sys, where the schematics are all-in-one is phenomenal," Lein said. "It definitely makes it easier on the programmer.”

“We've got one or two people, myself included, who handle the programming," said Lein. "When we're at home and we get service calls, it's so great to be able to have the remote Signal Probe and be able to analyze what's going on with the system from anywhere.”