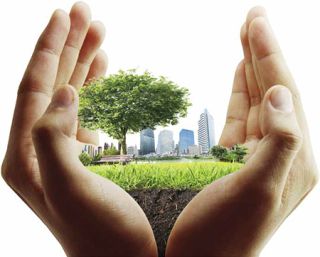 Most of the 2000s saw an influx of sustainable architecture, with designers turning their focus on ways to create buildings with a smaller carbon footprint. This wasn’t just a passing fad though— sustainable architecture still plays an important role in today’s infrastructure as planners seek designs that can help the Earth and save energy costs for the long term. For the AV industry, jumping into these green initiatives was a bit of a scramble at first, but now consultants have found a way to help companies design sustainable AV solutions without spending too much money.

“I think the focus has tweaked itself to be much more about smart building technologies to put into a facility that doesn’t cost extra money but offers a lot of benefits,” said Scott Walker, president and CEO of Waveguide Consulting. “Post-2008 recession, there is less emphasis on pure sustainability and more on what the return investment is.”

Back in 2010, InfoComm, along with CompTIA and TIA, created the STEP Foundation as a way to promote technology sustainability in the built environment. The associations wanted to showcase how technology could contribute to, rather than detract from, sustainability. However, the foundation currently remains in a dormant stage, according to a statement from InfoComm.

The statement reads: “The goals of the STEP Foundation, while well-intentioned, have not been entirely fulfilled. While there were several wonderful STEP demonstration projects, the program itself became financially unsustainable due to a variety of market forces, including a sluggish economy, less reliance on environmental rating systems, and competitive pricing pressures in the building space. Rather than continue to make significant contributions to support the foundation on an annual basis, the associations involved have elected to suspend the foundation’s activities indefinitely.

“This decision was made after careful deliberation. We are grateful to the companies that championed STEP and to the industry volunteers that helped develop best practices, standards, and educational materials. The valuable information we have compiled on sustainability best practices will be shared by each association partner as it sees fit.”

“These solutions help users find the right space, set the room to their standards, and get it ready for when they arrive. It also allows the owner to get reports and see how efficiently the rooms are used—what rooms are booked but users are not showing up,” Walker explained.

Mobile devices are also a key component in sustainable AV, as they help users monitor and control settings in the room to meet green standards.

“It can be a challenge, what you do in the office, huddle room, conference room, etc,” Walker said. “We’re part of that building fabric, and there’s lots of things we can do in the AV industry to solve this.”

The Green Building Initiative recently released a revision for its American National Standard, known as ANSI/ GBI 01-2010: Green Building Assessment Protocol for Commercial Buildings, which is now open for public comment. The nonprofit organization is dedicated to accelerating the adoption of green building practices. This revision includes input to date from nearly 100 subject matter experts in the green building community through more than 50 public meetings and calls conducted as part of GBI’s American National Standard Institute (ANSI) approved procedures. The procedures dictate requirements for openness, balance, consensus, and due process.

The ANSI/GBI 01-2010 Standard forms the basis for the current version of Green Globes for New Construction (Green Globes NC), which was released in 2013 and is delivered through an interactive online platform, which breaks down the criteria into questionnaires and links users to online reference materials. The current Green Globes NC was also updated to include criteria from the Federal government’s Guiding Principles requirements. Additionally, updates were made to respond to customer feedback and incorporate changes that occurred in the market between 2010 and 2013.