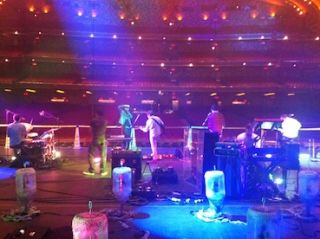 2012 has been a defining year for Grizzly Bear, a Brooklyn, NY-based indie rock band that has headlined at venues including Radio City Music Hall in New York and The Greek Theater in Los Angeles, and performed on television shows including “The Tonight Show with Jay Leno,” “Late Night with Jimmy Fallon” and others.

A few years ago, the band began employing a somewhat unorthodox practice of integrating guitar pedals and other stage effects into its onstage vocal chain. Thanks to front of house engineer Drew Malamud, the band has recently taken this approach to the next level by incorporating several TRUE Systems P-Solo preamplifiers, distributed by audio specialist Sennheiser.

"When I started working with Grizzly Bear back in 2009 around the release of ‘Vecka-timest,’ they were doing things like taking their stage mics and plugging them right into reverb pedals with just an XLR to 1/4-inch adapters on the end of the cable," Malamud said. “Then after the reverb pedal, they would go into a DI and that was their vocal chain. It didn't sound very good because a microphone likes to hit a preamplifier before anything else."

Malamud began searching for a suitable preamp solution to use at the foot of the stage, before eventually choosing the TRUE P-Solo. "I liked many things about the P-Solo," he said. "It is compact, has a robust build and also has an internal power supply rather than a wall wart. I was already familiar with the great sound because I have a TRUE Precision 8 in my own studio." Malamud soon acquired six TRUE P-Solos for Grizzly Bear's live performances, one for each vocal mic on the stage.

After setting up the P-Solos on stage, which took the microphone input and then ran to a Radial Engineering X-Amp active preamplifier, through a series of effects pedals and finally through a Radial JDI, there was a noticeable increase in the quality of the audio signal. "Once we had the TRUE P-Solos all set up and routed through the wireless personal monitors, the band couldn't believe the difference in sound they were hearing versus just plugging a mic into an effects pedal," Malamud said. "They were able to experience much more sonic detail and clarity."

Having noticed that TRUE preamplifiers are often used in recording trucks for well-known festivals such as Bonnaroo, Coachella and others, Malamud has long appreciated the natural sound of the TRUE P-Solo. "It is a clean sound that I knew would work with Grizzly Bear," he said. "It also had really nice LED metering on the front so I could see what was going on, even in extremely low light situations."

While its onstage vocal chain set up may be somewhat unconventional, it is the result of Grizzly Bear's relentless desire to recreate the sonic textures of their studio work in a live setting. "Part of their whole sound is the effects,” Malamud added. “When Grizzly Bear is recording and mixing in the studio, I am always thinking, 'How am I going to help recreate this sound live?' And for the onstage vocal effects, the TRUE P-Solo is a perfect fit."