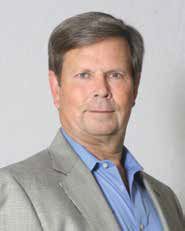 Traditionally, digital displays came in one shape: Flat. But that didn’t mean there wasn’t a way to change that—for years, engineers had worked to develop new solutions for display screens that could adapt to any surface shape. While presenting at McMaster University in Hamilton, Ontario, Richard Cope met with engineers that had developed a small, bendable substance that glowed, and he had an idea—what if he could use this to create digital wallpaper that could mold to any shape?

With 20 years in the U.S. Marine Corps, Cope, now CEO of NanoLumens, doesn’t think based on restrictions.

That’s kind of how Nanolumen’s flexible displays happened—instead of thinking ‘I can’t do this,’ Cope saw an opportunity to build off of the McMaster invention to create moldable displays.

Prior to founding NanoLumens, Cope served as an officer in the Marines until 1990, when he became special operations advisor to General Schwarzkopf, and played a part in Desert Storm. Following the end of that tour, he went on to become the senior program manager for the Defense Advanced Research Projects Agency (DARPA), a small R&D firm that helped produce national strategic plans for technology development and commercialization in both the private and military markets. By 1994, Cope retired from his military service, moving into the private markets.

“Leadership is very helpful, especially in the Marines,” Cope said when asked about how his experience in the military helped him when he made his move to the private sector. “You have to go out and figure things out for yourself, and in the fog of war, you never know 100 percent about what you are up to, but you have to act on it. Second, no battle plan ever survives the first contact with the enemy—you won’t expect it. Bringing this knowledge back to the business world, you can us it to create a reasonably accurate business plan.”

“There’s a lot of similarities between planning for combat and a business, and executing it. The Marine Corp prepared me immensely to be able to do that and be comfortable with it,” he continued.

For the last 10 years, Cope has led NanoLumens as CEO. When he discovered this flexible technology, he worked with it to see how far the technology could spread.

“We first tried to make it twice the size of a thumbnail, discovered what things worked and what didn’t and went from there,” Cope said.

As the technology developed, NanoLumens was able to create a product that they could adapt to the customer’s requests. “We sell complete solutions. We sit down with the customer and ask what it is you are trying to achieve,” Cope explained.

Every product NanoLumens designs is made at its headquarters in Atlanta, but the company has a presence in five continents. “We’re the only displays in the new World Trade Center in New York,” Cope said. “We’re in the Atlanta airport, Mac cosmetics stores around the world, New Zealand, Australia, Europe, and soon in the Middle East.”

Many times, Cope said the company is presented with requests that don’t have a solution, and the team has to find a way to meet that need.

“We haven’t come across anything that we haven’t been readily able to solve. We’ve done larger, more immersive displays recently—things that are more than your color rectangles or LCDs,” Cope said. “We cover sports, corporate, retail, transit, and other markets. It’s a good thing for us to have a wide platform.”